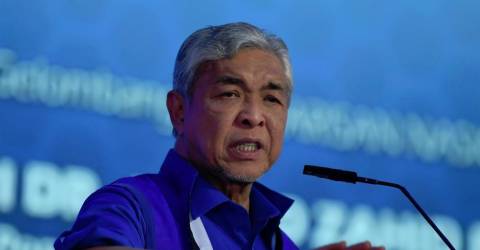 BERA: The government that was led by a prime minister from Barisan Nasional (BN) had brought more success and stability despite only having 15 months to do so before Parliament was dissolved, BN chairman Datuk Seri Dr Ahmad Zahid Hamidi said.

He said Prime Minister Datuk Seri Ismail Sabri Yaakob had performed excellently compared to the two prime ministers before him, and this can continue if the people give their full support to BN candidates in the upcoming 15th general election (GE15).

“For 39 months, the entire country suffered tremendously and it was fated by Allah for the (next) prime minister to be one from UMNO, BN,” he said when speaking at the Pahang-level ‘Solidarity, Stability and Prosperity’ gathering and the launch of Pahang BN’s machinery here today.

The Election Commission has fixed Nov 19 as polling day, Nov 5 for nominations while early voting will take place on Nov 15.

Ahmad Zahid said while many coalition parties offered to govern the country, none could perform better than BN.

Urging the BN machinery to work hard in the run-up to GE15, the UMNO president hoped BN would be able to repeat its past success, especially its two-thirds victory in GE11, which he said ‘dwarfed’ the Opposition’s voices in Parliament.

In his speech, Ahmad Zahid also hinted that Wan Rosdy will continue to lead the state government should BN emerge victors again in the state election that will be held simultaneously with GE15, adding that he was optimistic Pahang BN’s target of securing 30 of the total 42 state seats can be realised.

Ahmad Zahid said the Pahang government had performed well under Wan Rosdy’s leadership and expressed confidence he would be able to continue that role.

In GE14, BN won 25 seats in Pahang, Pakatan Harapan (nine) while the rest were won by PAS. – Bernama