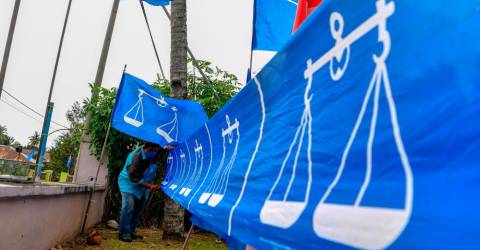 In his speech at the Wanita BN convention on Sunday, Ahmad Zahid pledged that BN would implement automatic citizenship to overseas-born children of Malaysian mothers.

Prof James Chin of the University of Tasmania Asia said the tactic of politicising such issues to win votes was not uncommon.

“Zahid realises that the issue can be turned into a highly controversial one. It also costs his party nothing to fight for this, given that most Malaysians already agree that Malaysian mothers should have equal rights as fathers,” he told theSun.

He said since opposition parties have also been fighting for the cause, it presents a non-issue for BN to make such a promise.

“BN had 60 over years to fix this, yet it did not. This is a standard tactic where eventually, a committee would be formed and then take years to come up with a decision. The matter will then drag on to the next election as another ‘promise’.

“If this is an important matter, then the party should act on it now rather than wait until after the general election. Start the ball rolling. Also, it is the prime minister who calls for the elections, not Ahmad Zahid,” he said.

“So, with the time that is available, BN should fight for this issue now rather than wait.”

Meanwhile, Batu Kawan MP Kasthuri Patto asked why it was necessary to wait for GE15 to amend the Federal Constitution although it is Ahmad Zahid’s party that is in power now.

“Will Ahmad Zahid support the amendment of the Constitution so that Malaysian mothers can transfer citizenship to their children born overseas like Malaysian fathers?”

“In the next Parliament session, continue to present constitutional amendments. I will support it. I was in court last week with the affected mothers. We must help them now,” he tweeted.

However, Universiti Malaya political analyst Dr Awang Azman Awang Pawi does not see the move as political manipulation since Umno women members have spoken in support of the issue.

“People like Datuk Seri Azalina Othman have spoken about this, calling for the government to be fair about it as it is a human rights issue.

“Even the High Court decided that babies born abroad to a Malaysian mother and a foreign spouse should be automatically entitled to citizenship,” he said.

“This should not be seen as a political issue but for what it is – a human rights issue. The BN government should accept any good suggestions to eliminate gender inequality in Malaysia.”