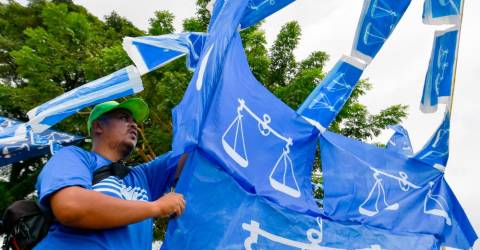 Prime Minister Datuk Seri Ismail Sabri Yaakob said he is confident that the spirit of cooperation between the BN and GRS machinery would help them achieve the target, including the seats in zone five of Sabah covering Beluran, Libaran, Batu Sapi, Sandakan and Kinabatangan.

“As such, I’m counting on the contribution (of Parliamentary seats) from Sabah, especially the zone five areas,” he said in his speech at a meet and greet programme with the people of Libaran at the Gum Gum People’s Housing Project here today.

This collaboration, which will continue in GE15, sees BN and GRS fielding their candidates in 12 and 13 seats respectively out of the total of 25 parliamentary seats in the state.

Ismail Sabri said he was impressed with the closeness of the BN-GRS machinery and was confident that the unity and spirit of cooperation could contribute to their victory, especially in the Libaran parliamentary constituency.

The Umno vice-president also reminded the people, especially Sabahans, to choose a party that can defend their destiny, take care of their welfare and provide prosperity for a better future.

According to him, BN is a coalition capable of providing the best service to the people through various high-impact development projects, such as the construction of the Pan Borneo Highway.

He said this was different compared to Pakatan Harapan (PH), which helmed the Federal government for 22 months after GE14, failing to fulfil its promises and instead cancelled development projects approved by BN.