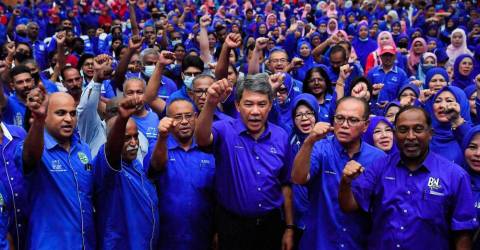 KUANTAN: Barisan Nasional (BN) will refine suggestions for the party to review the Parliamentary and state assembly seat quota system between its component parties as preparation for the 15th General Election (GE15).

Its deputy chairman, Datuk Seri Mohamad Hasan said whatever the strategy is, it will be implemented so that the coalition can win the GE15, which is expected to be held soon.

“It is a matter that needs to be refined, people say (it) makes a lot of sense… whatever we do, it must be the right step. If it leads to defeat, why should we even go there, that’s what Datuk Seri Wan Rosdy Wan Ismail (Pahang BN chairman) meant.

“I welcome it and will look at it because there’s a need to also take into account several other factors that require to be refined thoroughly and carefully,” he told a media conference after holding a meeting with the leadership of the Pahang BN component parties here yesterday.

Earlier, Wan Rosdy, who is also Pahang Menteri Besar, in his speech, urged the leadership to thoroughly study the quota system involving Parliamentary and state seats before GE15.

“If already know going to lose why field (a candidate), it’s a waste of time, money and energy. I apologise to our component friends, as a leader I need to highlight this matter for our common good… because we want to win,” said Wan Rosdy.

According to him, the Pahang BN targets to win all 14 Parliamentary seats and 35 out of the 42 state seats in GE15.

Meanwhile, Mohamad, in his speech, said Prime Minister Datuk Seri Ismail Sabri Yaakob, who is also vice-president, had given his commitment that the GE15 would be held soon.

“… but he did not give a date, although he did say he won’t drag it until next year, so it’s clear the GE will be this year. If it’s this year, don’t tell me it will be held in December (because) then people will have to ‘swim’ to go and vote… that is the time period we need to pay attention to and do the work,” he said. – Bernama