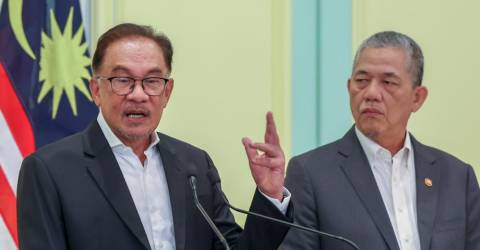 KUALA LUMPUR: Bank Negara Malaysia (BNM) reserved the right and authority in making decisions such as the overnight policy rate (OPR) to ensure the stability of the country’s economy without the intervention from the government.

Prime Minister Datuk Seri Anwar Ibrahim (pix) said the right and authority that have an impact on the national economy have been given specialisation respectively as stipulated in Malaysian regulations and laws.

He was responding to a question on the impact and action by MoF following the expected increase in OPR twice by BNM.

Anwar said BNM is mandated to promote monetary and financial stability that is conducive to the continued growth of the Malaysian economy.

Therefore, he said a joint discussion involving BNM Governor Tan Sri Nor Shamsiah Mohd Yunus and Minister of Economy Mohd Rafizi Ramli would be held before drafting the Budget 2023.

“I invited the Bank Negara (Malaysia) governor and Minister of Economy to discuss together.

“As I remember, this is an approach that I used to do. It is not foreign to me because the action of any party will also involve the overall economic policy,” he said.

Anwar, who is also the Minister of Finance, is scheduled to table the Budget 2023 in the Dewan Rakyat on Feb 24 at the First Session of the 15th Parliament.-Bernama