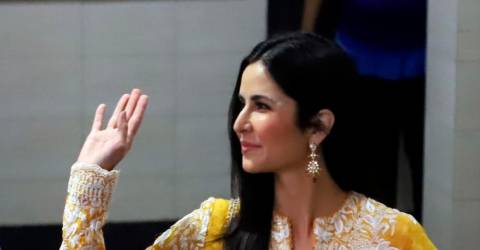 NEW DELHI: Katrina Kaif(pix), one of Bollywood’s most successful stars, got married on Thursday, two decades after she came to India from Britain.

“Only love and gratitude in our hearts for everything that brought us to this moment. Seeking all your love and blessings as we begin this new journey together,“ read an Instagram post shared by Katrina, 38, and her 33-year-old actor husband Vicky Kaushal.

They tied the knot in a lavish ceremony in the western state of Rajasthan in the presence of film celebrities, family members and other guests.

Hong Kong-born and London-raised Katrina’s father Mohammed Kaif, a businessman of Kashmiri descent, and British mother Suzanne Turquotte, separated when she was a child.

She has three elder sisters, three younger sisters, and an elder brother.

The Indian media in recent days buzzed with updates on the couple’s movements, wedding preparations, gossip and the elaborate wedding rituals.

Katrina came to India as a 17-year-old and made her debut in the competitive world of Bollywood with the 2003 movie “Boom”.

Besides being an outsider, Katrina initially struggled with the Hindi language, but she overcame those handicaps to become one of Bollywood’s top celebrities.-Bernama