A joint operation between the U.S. Border Patrol and local police led to the arrest of 216 migrants who were hidden in five stash houses in southern Texas.

Laredo Sector Border Patrol agents and the Laredo Police Department made the apprehensions during a series of raids Monday and Tuesday in the border town of Laredo, according to U.S. Customs and Border Protection (CBP).

The raids came as the number of migrants arrested at stash houses has skyrocketed in the last year.

Data provided by the Laredo Sector Border Patrol to DailyMail.com showed that 3,998 migrants were arrested at 189 stash houses from October 1, 2020 until June 9.

In comparison, the sector took just 464 migrants into custody after raiding 46 homes in the whole year between October 1, 2019 and September 31, 2020.

The raids this week started when border agents received an anonymous tip off Monday, leading them to find 20 undocumented immigrants from Mexico, El Salvador and Honduras inside a home on Mims Avenue.

Temperature inside the residence peaked at nearly 100 degrees Fahrenheit.

Authorities were later led to a residence on Canelo Drive which doubled as a stash house for migrant smugglers and discovered 20 Mexican nationals, all of whom were unlawfully in the United States.

U.S. Border Patrol agents assigned to the Laredo Sector detained 55 migrants at a stash house on Invierno Drive in Laredo, Texas, on Tuesday. U.S. Customs and Border Protection reported that a total of 216 migrants were found in five homes that were being used by smugglers to hide the individuals after they have unlawfully crossed the United States-Mexico border 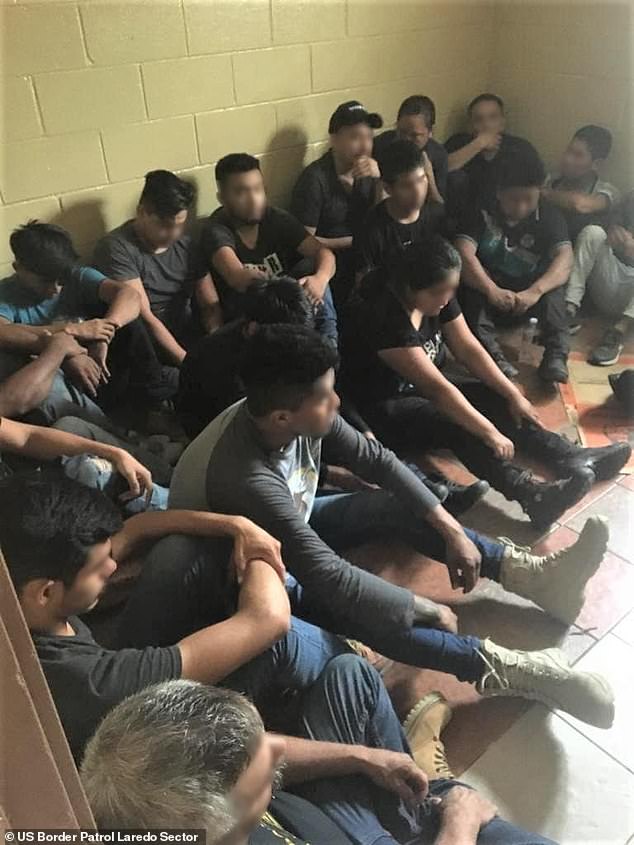 Pictured above are the migrants who were taken into custody by U.S. Border Patrol agents from the Laredo Sector and the Laredo Police Department during the one of the five raids that took place at homes used by smugglers to hide individuals who were illegally ferried across the United States-Mexico border

Agents assigned to the Laredo Sector Border Patrol’s Laredo South Station and a team of cops discovered a residence located on Canelo Drive in the Texas border town of Laredo that doubled as a stash house for migrant smugglers. A total of 20 Mexican nationals, all of whom were unlawfully in the United States, were taken into custody

Following a request from the LPD, agents then went to San Francisco Avenue and searched a home where 82 migrants where being housed. The individuals were identified as natives of Honduras, Guatemala, El Salvador, Nicaragua and Mexico.

A fifth and final residence used by smugglers to hide migrants was raided on San Agustin Avenue. A total of 30 individuals from Mexico and Guatemala were detained.

CBP did not say if there were any minors within the 216 individuals who were arrested or if any of the migrants had criminal records or were deported in the past. 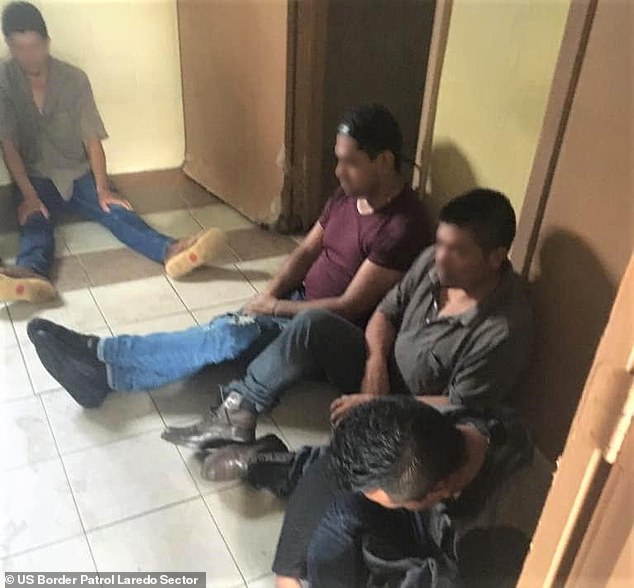 A fifth and final residence used by smugglers to hide migrants was raided on San Agustin Avenue. Pictured are four of the 30 individuals from Mexico and Guatemala who were detained

‘Illegal stash houses remain in high use throughout our community, which continues to be highlighted by our (Laredo) partners,’ Deputy Chief Patrol Agent Carl E. Landrum said.

‘These houses often have no electricity, no running water or any type of air conditioning, and the people being held inside are not free to leave. Summer heat makes these situations extremely dangerous.’

The Laredo Sector’s is responsible for covering 96 counties and 84,041 square miles along southwest and northeast Texas.

This chart shows how 2021 border crossings – pictured in blue – rocketed on crossings made in 2020, represented by the brown line (2018 is pictured in gray, with 2019 in orange)

A new monthly report released by CBP on Wednesday showed that Border Patrol agents stopped 180,034 migrants in May, a slight increase from 178,854 the prior month, with the increase driven largely by single adults.

For its part, the Laredo Sector saw encounters with migrant individuals rise from 10,926 in April to 76,670 in May.

Total encounters are near 20-year-highs, though they aren’t directly comparable because expulsions under pandemic-related powers that deny an opportunity to seek asylum carry no legal consequences, encouraging people to make repeated attempts.

U.S. Border Patrol encounters with migrants have increased during former President Donald Trump’s last nine months in office and continued to rise under his predecessor.

President Joe Biden has kept in place Title 42, a Trump-era rule that allows for border crossers to be expelled, generally within two hours, on public health grounds of trying to prevent spread of the coronavirus.

Encounters with people in families totaled 44,794 in May, down from 50,228 in April. Only one of every five who came in families last month was expelled under pandemic-related authority.

Nearly nine of every 10 single adults was expelled under the public health emergency. Unaccompanied children are exempt from expulsion and allowed to remain in the United States to seek asylum.

CBP’s report showed that there were 14,158 unaccompanied children encountered last month, down from 17,148 in April and an all-time high of 18,951 in March. May’s number was the third-highest on record.