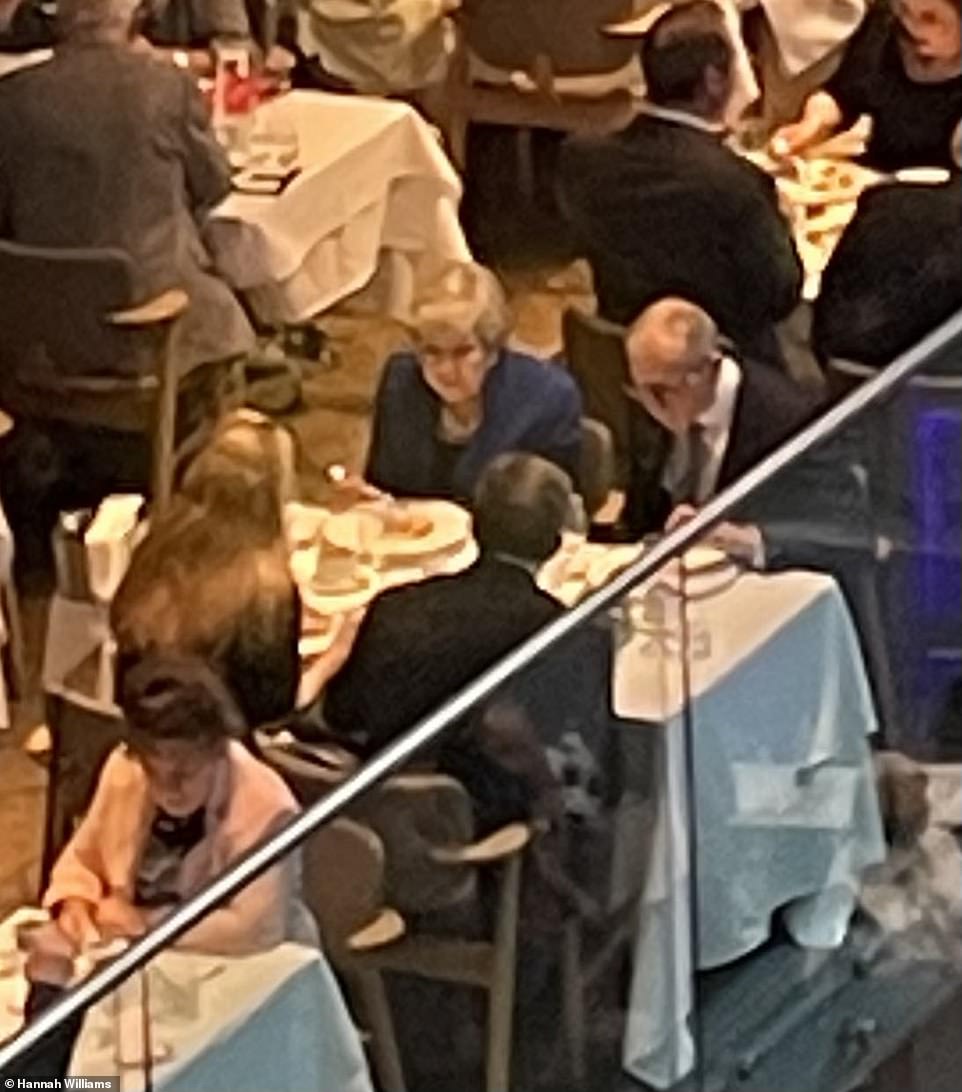 A dish best served cold, Theresa? May is spotted ‘living her best life’ as she dines with friends after enjoying clown opera Pagliacci which ends with famous line ‘the comedy is finished’… and Gove was there too

Amid the unravelling political drama in Westminster last night, Theresa May was probably pleased to be well away from the action with her husband Philip as they enjoyed dinner and a night at an opera about love and betrayal.

The former prime minister was spotted ‘living her best life’ at the Royal Opera House in Covent Garden yesterday evening, attending the opening night of the double production of Cavalleria Rusticana and Pagliacci.

She was photographed by attendee Hannah Williams, a PR expert and fellow of the Royal Society of Arts, who tweeted shortly before 9pm last night: ‘I AM AT THE OPERA AND THERESA MAY IS HERE LIVING HER BEST LIFE!!!’

Mr and Mrs May were later pictured leaving the venue in a car, accompanied by security, while chaos reigned at Number 10 as her successor Boris Johnson tried to save his premiership after a pair of major Cabinet resignations.

Levelling Up Secretary Michael Gove was also reported to have been at the same venue last night – although he is said to have left before the singing started, following news of Rishi Sunak’s resignation, according to The Times.

Mr and Mrs May were photographed by opera attendee Hannah Williams, a PR expert and fellow of the Royal Society of Arts 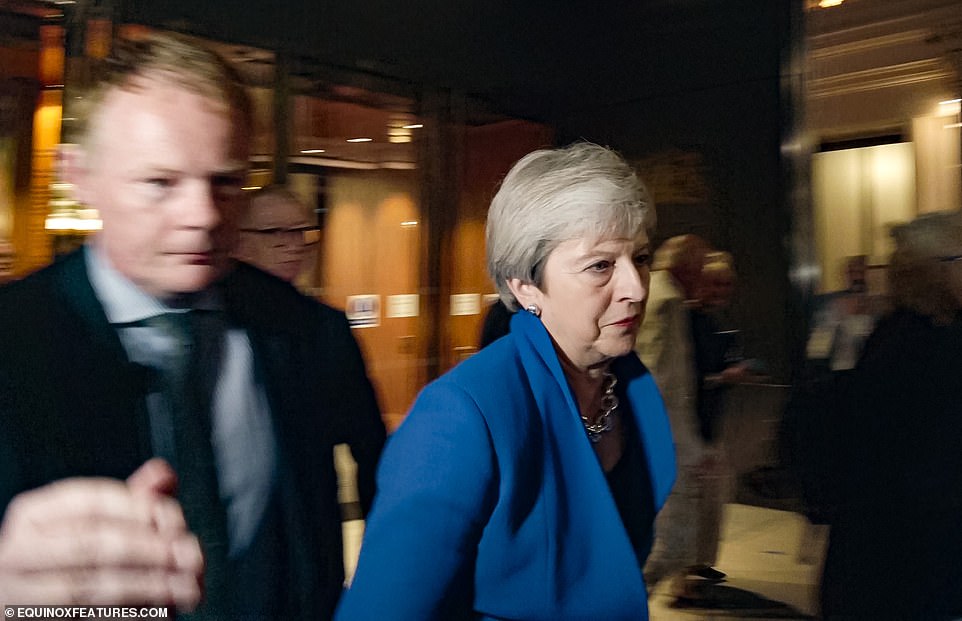 Theresa May leaves the Royal Opera House in London with security after the production last night, followed by husband Philip 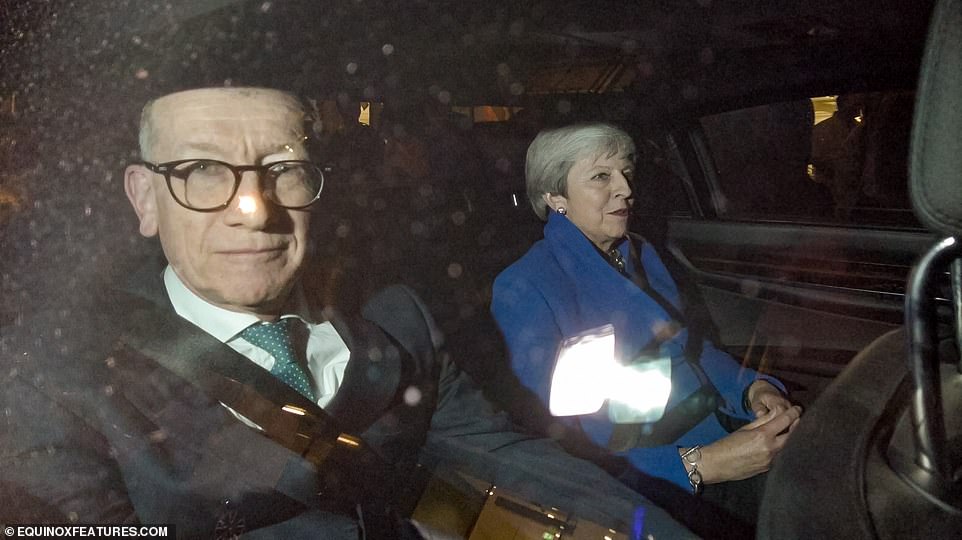 Cavalleria Rusticana, which translates as ‘Rustic Chivalry’, is a one-act opera by Pietro Mascagni about a passionate love tragedy on Easter Sunday morning in a Sicilian village, which premiered in Italy in 1890.

It is often performed with the opera Pagliacci by Ruggero Leoncavallo – another story of love and jealously which is also set in Italy and premiered just three years later in the same country – in a double bill known as ‘Cav/Pag’.

Pagliacci translates as ‘Clowns’ and is famed for finishing with the line ‘La commedia è finita!’, which translates as ‘the comedy is finished’ – something observers were keen to note amid the threat to Mr Johnson’s leadership.

Mrs May’s visit to the production yesterday came after Rishi Sunak quit as chancellor alongside Sajid Javid who resigned as health secretary, as a series of exits threatened to force Mr Johnson from Number 10.

Nadhim Zahawi is the new Chancellor and Steve Barclay has become Health Secretary. The Prime Minister was also forced into a humiliating apology to address the row over scandal-hit former deputy chief whip Chris Pincher.

The turmoil prompted social media users to post a series of tongue-in-cheek memes suggesting that Mrs May was privately celebrating what had happened – three years after she quit as Conservative leader on June 7, 2019.

One referenced the notorious ITV interview in June 2017 when Mrs May claimed that the naughtiest thing she had ever done was to run through fields of wheat as a child. The Twitter user wrote: ‘I have absolutely no doubt Theresa May will once again be running through fields of wheat, this time with a G&T in hand.’

Others suggested she would dance as she arrives at Prime Minister’s Questions today. One added: ‘If you listen closely enough you can hear Theresa May popping a cork and shouting Alexa play dancing queen volume seven.’