Ministers have been told to drop the ‘track’ in test, track and trace after focus groups showed that the concept scared people, it has emerged.

The ‘tracking’ portion refers to the NHS mobile app that can detect if someone has been in close contact with a Covid-positive individual, which is still going ahead.

The Government is now believed to be discussing a new ‘test, trace and isolate’ phrase, as wording for the strategy becomes increasingly more confusing for the public.

The Welsh government have opted for a ‘Test, Trace, Protect’ strategy, with ‘protect’ referring to people with the virus self-isolating to prevent a spread to the rest of the population.

Ministers are being told to drop the ‘track’ in test, track and trace after focus groups showed that the concept scared people, as Boris Johnson attempts to start a test and trace system before June 1

And the Scottish government have gone one step further with their ‘test, trace, isolate, support’ strategy, with support including help with food and medicine as well as financial support.

At Prime Minister’s Questions on Wednesday, Labour leader Keir Starmer challenged Boris Johnson over the government’s failure to track the spread of the disease after mid-March.

‘That’s nearly 10 weeks in a critical period without effective tracing. That’s a huge hole in our defences, isn’t it prime minister?’ he said. 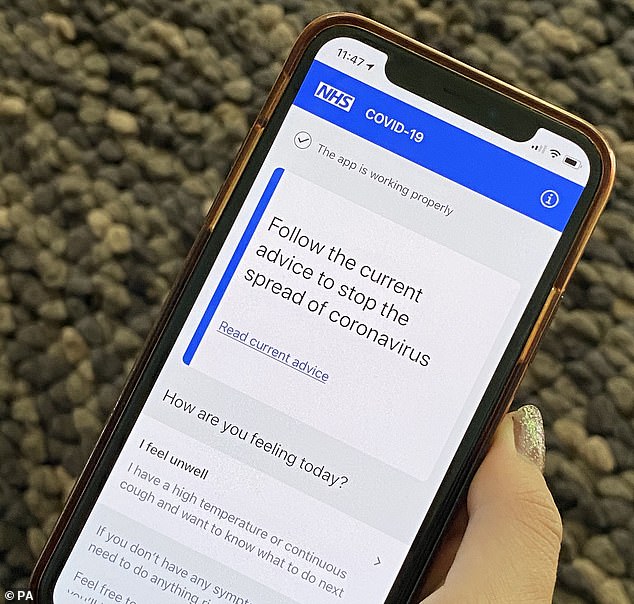 The ‘tracking’ portion refers to the NHS mobile app that can detect if someone has been in close contact with a Covid-positive individual, which is still going ahead 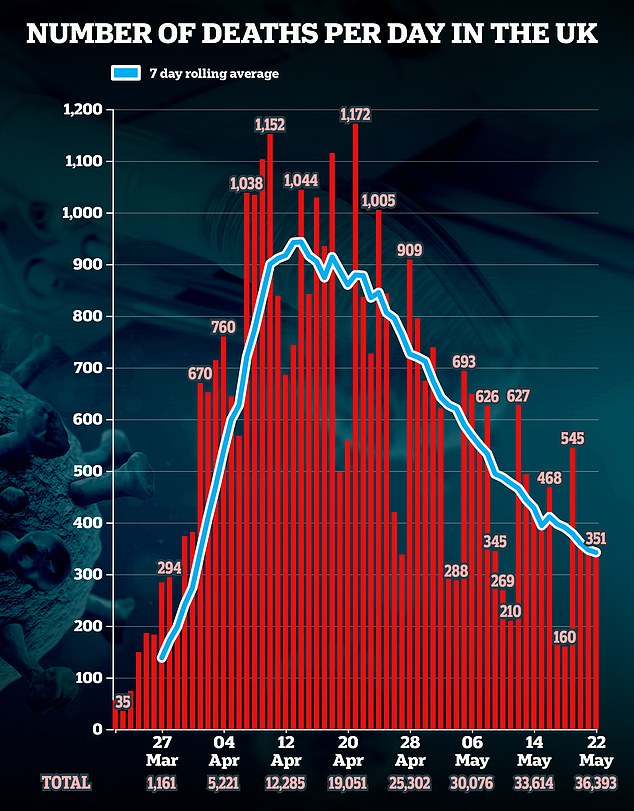 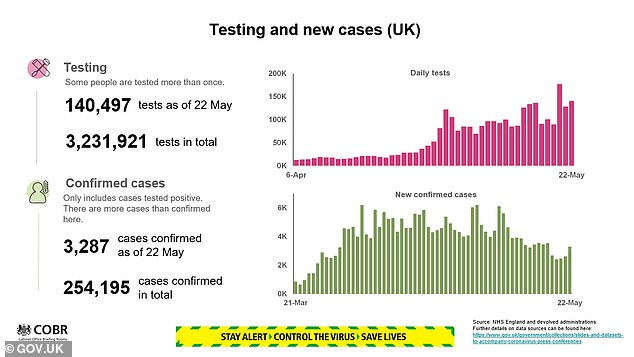 Coming under pressure for details, Mr Johnson claimed that the UK would have a ‘world-beating’ test, track and trace system in place by June 1.

But during the cabinet meeting on Thursday, the Prime Minster suggested that while the scheme would be ready, it would not be comprehensive, according to The Times.

‘He suggested it wouldn’t be all singing, all dancing but the system would be ready,’ a minister told the publication. ‘He was optimistic that we would be able to move into the next phase of easing the lockdown, but it was too early to make that decision.’

This app-based system will be deployed in conjunction with traditional contract tracing methods and is not intended to be a silver bullet, Apple and Google representatives said 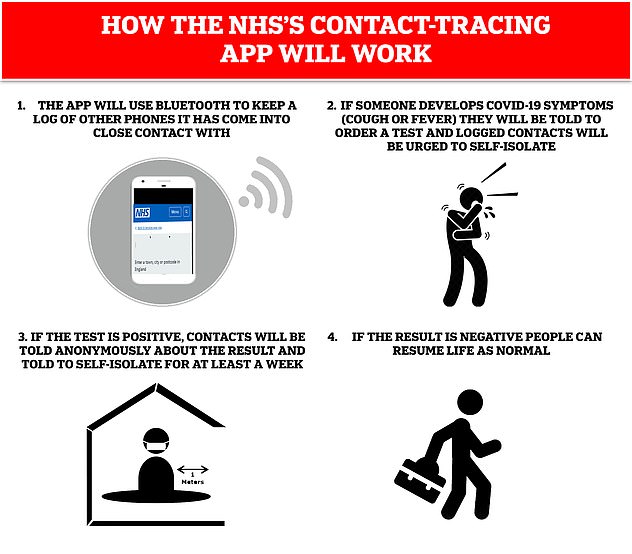 Mr Johnson will announce the next steps on Thursday.

Matt Hancock, the health secretary, urged people yesterday to ‘do their bit’ and go into self-isolation if they had had contact with someone with the virus, even if they had no symptoms. No 10 has not ruled out fining people who fail to go into isolation.

The Office for National Statistics showed that of all those who said they had self-isolated over the past seven days, only 28 per cent had not left their home. While the data was unclear, it set alarm bells ringing.

‘The difficulty doing the isolate approach is that the numbers of people who are self-isolating look appalling,’ one official said. ‘People who think they might be symptomatic still are not self-isolating.’

It comes as a senior health official said that mass coronavirus testing was stopped in mid-March due to the ‘sheer scale of cases in the UK’.

Professor Yvonne Doyle, medical director of PHE, said that widespread testing and contact tracing was scrapped by ministers on March 12 due to the huge number of cases being seen across the country. 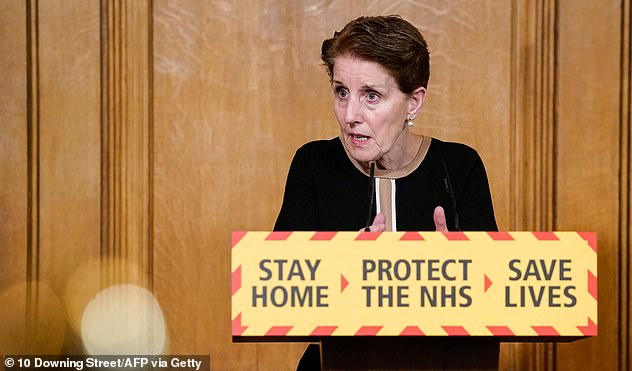 The Government changed their stance on trying to combat the virus on that date as they believed the NHS was the better resource to test those with coronavirus compared to more widespread testing.

However, Professor Doyle’s comments contradict those of Matt Hancock this week, with the Health Secretary telling the House of Commons on Tuesday that community spreading of the virus was low in early to mid-March.

She said: ‘So we have multiple introductions, with many hundreds of thousands of people by March who had now been exposed to this virus in this country.

‘Contact tracing could not possibly have had the capacity to address that.

‘And with the capacity of lab testing and our contact tracers, we felt the most important thing to do was to focus on where there was national concern, which was the capacity of the NHS, to accrue that testing.’

Professor Doyle admitted that the UK had looked into replicating South Korea’s treatment model and even stated that the two nation’s methods were very similar in the month of March.

She added: ‘We did not reject the South Korean model, in fact we were very interested in what was happening internationally from the get-go.

‘The testing capacity and testing profile of PHE’s approach in the contain phase – which is between January and March – was very close to the one of South Korea for quite a long time, into early March.’

How the UK’s testing chaos developed

February 21: Government experts conclude at a meeting that the disease is still only a ‘moderate’ threat to the UK.

March 12: The UK shelves efforts to test and ‘contact trace’ everyone with symptoms on March 12, as the government’s response moves from ‘containment’ into a ‘delay’ phase.

Instead people who think they have the illness are urged to self-isolate unless their conditions became so severe they need medical help.

Chief Medical Officer Chris Whitty said: ‘It is no longer needed to identify every case, so we will pivot testing capacity to identify people in hospitals with symptoms to ensure they don’t pass it on.’

March 13: Chief Scientific Officer Patrick Vallance suggests the strategy is not to ‘suppress’ coronavirus completely but ‘reduce the peak’ as up to 60 per cent get infected. He says that means the UK will ‘build up some kind of herd immunity so more people are immune to this disease’.

March 16: Boris Johnson urges Britons to follow ‘social distancing’ guidelines as well as isolating when they have symptoms, in a change of policy after modelling found the death toll could be much higher than previously estimated.

March 17: Patrick Vallance tells a Commons committee testing numbers should be higher. ‘I think we need a big increase in testing, and that is what I am pushing for very hard.’

March 18: Amid growing criticism, the PM declares that there will be a big expansion of tests from under 5,000 a day to 25,000. He also sets an ambition of 250,000 tests a day, although this includes potential mass antibody tests for whether people previously had the disease.

March 21: Downing Street sends an email to research institutions begging for machines needed to process testing samples. No10 denies this was the first time it had raised the idea.

March 27: Mr Johnson and Matt Hancock announce they have tested positive for coronavirus. Prof Whitty goes into self-isolation with symptoms.

March 29: Cabinet ministers Matt Hancock and Michael Gove hail news that the UK is now carrying out 10,000 tests a day.

April 1: It emerges the UK has still not carried out 10,000 tests in a day, despite apparently having the capacity to do so.

April 5: The PM’s official account causes confusion by tweeting that the target is for 100,000 people to be tested a day, rather than 100,000 tests as other ministers have suggested.

Many people need more than one test in a day for clinical reasons, such as to confirm results.

April 6: Mr Johnson is admitted to hospital as his symptoms fail to subside.

April 30: Mr Hancock declares victory with 122,000 tests in a day. However, it emerges that the government has been counting tests posted out but not actually completed.

That is despite Mr Johnson and others stating the numbers are for tests ‘carried out’.

The numbers tumble below the target again in the following days, although the government insists capacity remains in place.

May 5: Trials of an NHSX app to track who has been in proximity to infected people begin on the Isle of Wight.

May 18: It emerges the app will not be ready for national use by ‘mid-May’ as planned, although Downing Street insists track and trace can start without it.

Mr Hancock announces that everyone over the age of five displaying coronavirus symptoms can now apply for a test, although key workers and patients will be prioritised.