By Jack Doyle Associate Editor For The Daily Mail

He is little known outside Westminster, but 35-year-old Australian Isaac Levido will win the lion’s share of the credit for Boris Johnson’s election triumph.

Softly spoken and sporting a black beard, Mr Levido was director of politics and campaigning in Conservative Campaign Headquarters – and the undisputed chief of the Tory campaign.

After the results of the exit poll were revealed, staff at the party’s Westminster HQ chanted ‘Oh, Isaac Levido’ – mocking the tribute to Jeremy Corbyn which used to be sung by Labour supporters.

A senior Tory source said: ‘Isaac showed real leadership throughout the campaign – he never panicked, lifted spirits on difficult days and had a laser focus on the end result.

‘He quickly gained the trust of everyone around him and deserves all the plaudits for an extremely well-run and disciplined campaign.’ Under Mr Levido’s plans the Tories targeted 50 swing seats and sought to defend another 50, under plans to secure a ‘functional’ majority.

Privately, he has described Mr Johnson’s ‘fundamentals’ as ‘very positive’. Internal polling showed the PM was ‘miles ahead on leadership and the numbers are moving in the right direction’, he told ministers.

Mr Levido is a close confidant of Lynton Crosby, the electoral strategist who worked on Mr Johnson’s two mayoral campaigns.

He recently served as the Australian Liberal Party’s deputy director, and was at the heart of the campaign which won Scott Morrison a surprise victory last year. 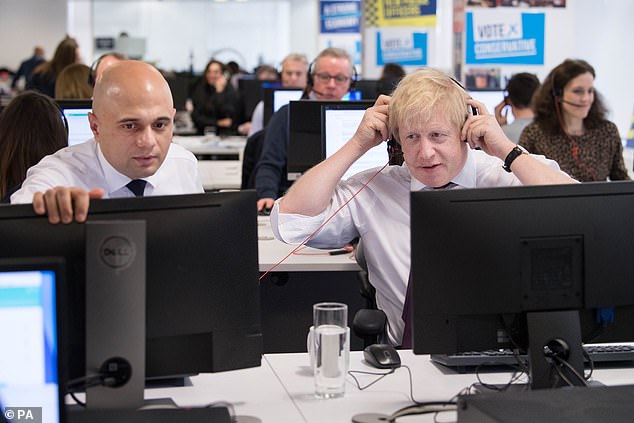