Boris Johnson today vowed to use his thumping 80-seat majority to ‘transform this country’ with the raft of eye-catching policies he pledged during the election campaign.

The Prime Minister’s bolstered tally of 365 Conservative MPs will allow him to ram through legislation which would have previously been derailed by opposition lawmakers.

Brexit – the cause and flagship issue of the Christmas ballot – was relentlessly blocked by Remain MPs but will now almost certainly be forced through the Tory-dominated Commons by the end of January.

Yet important domestic issues were also front and centre of the campaign, not least the NHS, immigration, crime and the Union.

Nothing legally compels the PM to stick to the promises he made during the campaign, besides a likely drubbing at the ballot box in five years time.

But this afternoon on the steps of Downing Street, he doubled down these on these commitments to ‘unite and level up’ – the driving ethos of his rebranded ‘People’s Government’.

Below, MailOnline analyses the campaign promises Mr Johnson has vowed to honour, and whether they were election-winning gimmicks or achievable policies.

In a speech on the steps of No10, Boris Johnson said he was determined to ‘repay the trust’ of the wave of former Labour supporters who handed him a huge new mandate 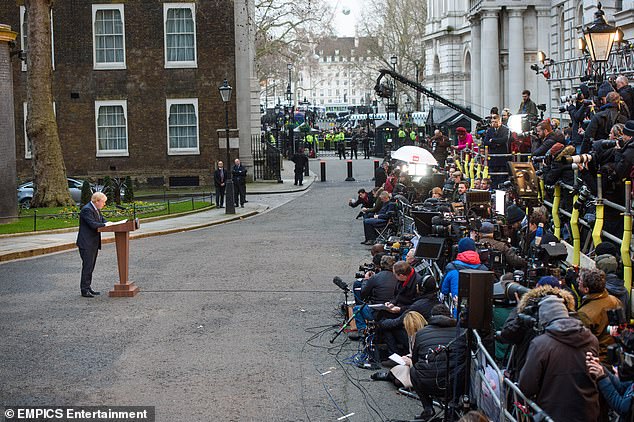 He said the election rout had finally settled the Brexit issue, saying pressing ahead was now the ‘irresistible, unquestionable decision of the British people’ 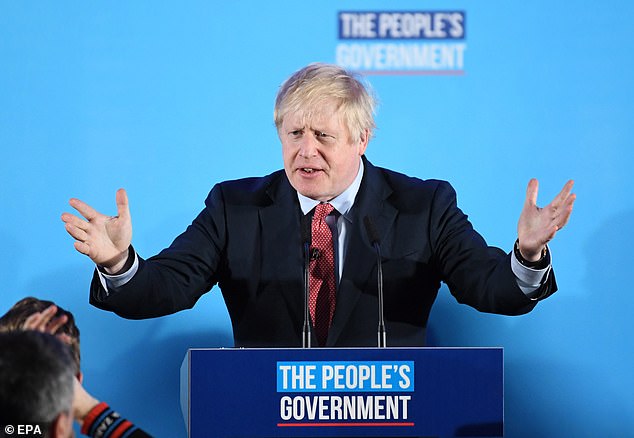 In a barnstomring victory speech, he told cheering crowds: ‘That’s it. Put a sock in the megaphone.’ He joked: ‘Let’s get Brexit done. But first, let’s get breakfast done’

‘The overwhelming priority of the British people now is that we should focus above all on the NHS… 50,000 more nurses, 40 new hospitals’

The health service has been a major talking point of the election, with Labour’s main attack line savaging the Tory’s capacity to safeguard its sanctity.

Mr Corbyn has said the Conservatives cannot be trusted to protect the NHS from private investment and claimed Mr Johnson was planning to ‘sell it to Donald Trump’ in a post-Brexit trade deal.

But today Mr Johnson pledged to pour funding into the NHS and repeated his promises of ‘50,000 more nurses’ and ’40 new hospitals’

The Conservative’s use of the term ‘more’ is widely accused of being a fudge because critically the party is not committing to 50,000 new nurses.

On closer inspection, 18,500 of this figure are nurses already working in the NHS who the Conservatives will hope to dissuade from leaving the profession, with only about 30,000 actually being recruited into the health service. 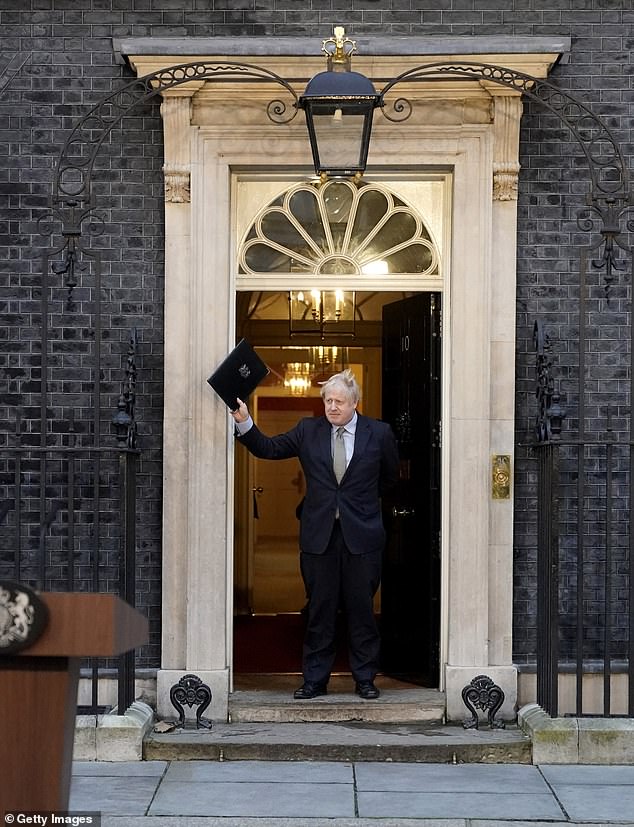 The huge tally of 365 seats was confirmed this afternoon as the Tories held on to St Ives, the last of the 650 to declare 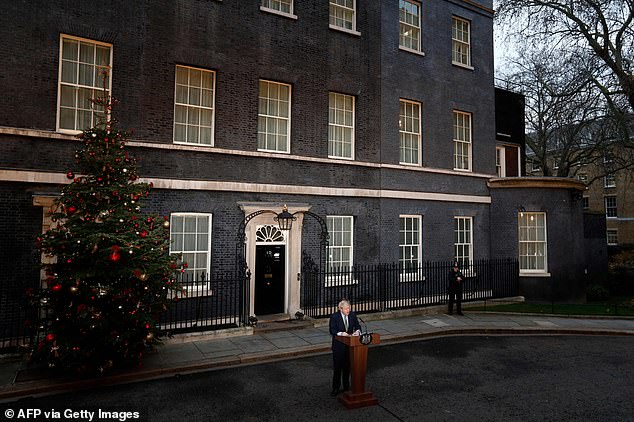 Better retention rates would mean that there could be more nurses than there otherwise would be if they dropped out, but they are not new nurses.

Only 14,500 nurses will be trained from scratch as undergraduates, while 12,000 are understood to be recruited from overseas and 5,000 would be recruited as apprentices.

The party’s costings document said the expense of training, recruiting and retaining 50,000 nurses will be £879million in 2023/24.

But independent fact-checker service Full Fact claims that 50,000 nurses would cost £2.8billion annually, which could leave the government having to dip deeper into its funds.

This promise pre-dated the election campaign, when in September the PM said I’ve been launching our programme to build 40 new hospitals in this country.

In reality, the government pledged funds to revamp six hospitals by 2025 while 38 other hospitals received money to plan for building plans between 2025-2030, but now the funds to actually begin construction.

However, with a haul of MPs ready to usher in the PM’s mandated manifesto commitments, nothing is stopping Mr Johnson from building the 40 new hospitals.

But doing so will come at huge expense, with the Institute for Fiscal studies estimating the pledge will cost £24bn.

Is Mr Johnson going to sell the NHS to Donald Trump?

Jeremy Corbyn brandished unredacted trade talks between UK and US officials as proof the Tories are prepared to put the NHS up for grabs in a post-Brexit deal.

But his brash claim quickly unravelled. The NHS was barely mentioned in the papers, the President himself said he would not want a slice of the service if it were presented ‘on a silver platter’ and Health Secretary Matt Hancock flatly said the government would walk away from any deal which compromised the sanctity of the NHS.

Today the PM vowed to stick with his flagship crime policy to introduce 20,000 more police officers by 2022.

However doubt was cast on this pledge following Mr Johnson’s stint as London Mayor, where he announced a 5,000-officer hike to the Met which turned out to merely be a commitment to fill the vacancies of departing constables.

But the Conservatives have ironed out their policy and said the government will introduce 20,000 new officers – 6,000 in the first year, followed by 14,000 over the next two years.

The PM has budgeted the policy to cost £1.1billion. Police officers outside London typically earn a starting salary of £25,000, meaning 20,000 would cost £500million a year, rising to £700million after four years to factor in pay increases.

Yet this does not include training costs, which is estimated at roughly £13,000 per office, meaning a total expense of £258million.

This produces a combined cost of £958million, with the surplus £150million likely to be used to pay for the pay differences in the capital. 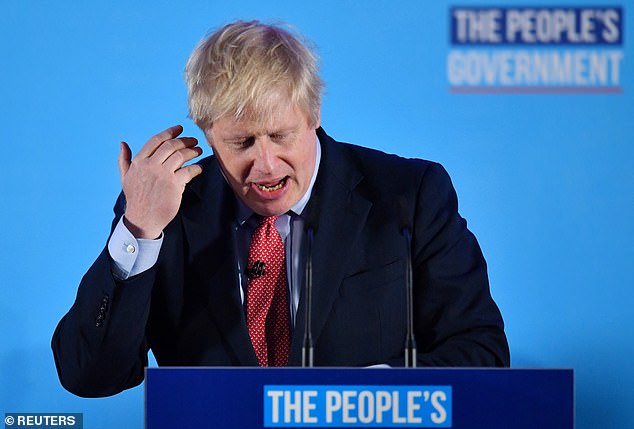 The bullish speech to activists in Westminster, which was followed by a victory stroll into Downing Street with girlfriend Carrie Symonds, came as the Conservatives racked up a stunning tally of 364 seats

In the latter stages of the campaign, Mr Johnson unveiled his blueprint to introduce a ‘Australian-style points-based immigration system’, echoing one of the Vote Leave campaign’s main slogans.

Today, he reaffirmed this committment and vowed to treat EU and non-EU citizens equally to attract ‘the brightest’ to the UK, while bringing numbers down.

Will Mr Johnson be able to introduce an Australian-style system?

Freedom of movement between EU member states means that European citizens are prioritised over those from third countries.

But when the UK leaves the bloc in January, the government will be free to impose its own migration policy.

This will be built around a three-tier ranking system which filters would-be immigrants based on their skill sets and the demands in the UK economy.

The first category in the proposed plan, ‘fast-track entry’, will be given to entrepreneurs, investors and those who have received awards in a qualifying field and have been endorsed as a recognised or emerging leader.

There would be no cap on numbers for people entering at this level.

The second category encompasses skilled workers – such as doctors, nurses and other health professionals – who have a confirmed job offer.

Those eligible for the NHS visa will receive fast-track entry and reduced fees.

The third category involves sector-specific rules-based schemes which would apply for low or unskilled workers to meet labour market shortages, such as for seasonal agricultural workers.

Will Mr Johnson be able to bring immigration numbers down?

Mr Johnson has scrapped Theresa May’s target to reduce migration to the ‘tens of thousands’, and has refused to be pressed on a figure.

He has instead said that the Migration Advisory Committee would be required to produce an annual report to advise on how to lower overall immigration, meet the needs of the UK economy and improve the country’s productivity.

The PM has vowed to bring the country together and heal the divides in the United Kingdom, not least the strain placed on the Union of nations.

However the other big winner of last night’s election was the Scottish Nationalist Party, whose flagship policy is for Scottish independence.

Will a second independence referendum be held?

Although the SNP cleaned up north of the border, an independence referendum has to be initiated by the Westminster government, with nothing legally compelling Mr Johnson to grant one.

In fact, the Tory leader has continually warned against another vote and could claim a mandate for refusing to legislate for one.

But his party only hold six seats in Scotland, and last night lost seven to the SNP.

If Mr Johnson does not grant a referendum, it puts his government on a constitutional collision course with the nationalists.