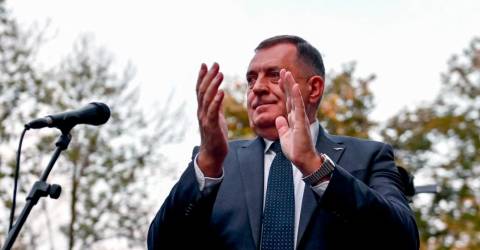 The recount “confirmed that the candidate Milorad Dodik representing the Serb people and who was in the lead… and remained so with the greatest number of votes won,“ said Suad Arnautovic, chairman of Bosnia’s central election commission.

The announcement comes weeks after Bosnians cast ballots in an election in early October, including for the president of Republika Srpska (RS) — the country’s Serb entity.

A preliminary count following the election gave the victory for the RS presidency to Dodik, with the Kremlin-friendly leader winning 48 percent of the vote, compared to 43 percent for opposition candidate Jelena Trivic.

However, on the day after the election opposition parties accused Dodik and his party of “organised plundering of the elections” and demanded a recount.

The election for the RS presidency was one of several votes held on October 2 at the central level and in the country’s two entities, the RS and the Muslim-Croat federation that make up the Balkan country.

Bosnia has been governed by a dysfunctional administrative system created by the 1995 Dayton Agreement that succeeded in ending the conflict in the 1990s, but largely failed in providing a framework for the country’s political development. – AFP