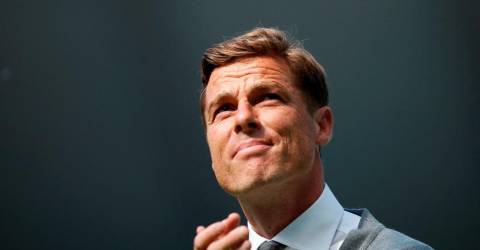 BOURNEMOUTH manager Scott Parker(pix) was sacked by the newly-promoted Premier League club on Tuesday, three days after they were thumped 9-0 at Liverpool for their third straight defeat.

The struggling south-coast club are fourth from bottom of the standings with three points from four games.

“I would like to place on record my gratitude to Scott and his team for their efforts during their time with us,“ the club’s owner, Maxim Demin, said in statement.

“However, in order for us to keep progressing as a team and a club as a whole, it is unconditional that we are aligned in our strategy to run the club sustainably.”

Bournemouth said their search for a new manager would begin immediately and first team coach Gary O’Neil would take over in the interim. They host Wolverhampton Wanderers on Wednesday.

Demin’s comments appear to be a response to Parker’s post-match interview at Anfield after their Premier League record-equalling defeat.

Parker said he was “not surprised” at the result and that he needed some new signings to strengthen his side, who finished runners-up in the second-tier Championship last season.

“It doesn’t surprise me. This is currently where it is at this moment in time. The players need help. Today proved too big a challenge. The levels were far too big,“ the 41-year-old said after Saturday’s defeat.

“We’ve got a decision to make as a club. There will be days like this. Time will tell. It’s a huge disappointment, a real humbling experience.

“We have some days where hopefully we can get some help in and support and help the current team, who came up from the Championship,“ he added.

“When I heard the news, I realised how important it is in this moment to have the right owners at the club,“ Klopp said.

Bournemouth are owned by Russian-born British businessman Demin who in 2019 assumed full ownership of the club after he had acquired an initial stake in 2011.

But under him the club have only signed Marcus Tavernier from Middlesbrough and Marcos Senesi from Feyenoord apart from free agents Ryan Fredericks, Joe Rothwell and Neto this season.

“Some clubs are owned by countries but others have a structure like us and maybe Arsenal,“ Klopp said.

“The three teams that have come up (from the second-tier Championship)… Nottingham Forest are spending, Fulham are and I can’t remember Bournemouth doing a lot, which is difficult for a coach. I felt for Scott.”

After winning their opening game of the season at home to Aston Villa, Bournemouth suffered defeats in three successive games but those fixtures came against ‘Big Six’ opponents in Manchester City, Arsenal and Liverpool.

While Parker’s sacking, after just 25 days of the league season, was a surprise it was not without precedent.

Paul Sturrock was sacked by Southampton nine days into the 2004-05 campaign while Peter Reid lasted 12 days of the 1993-94 season before parting company with Manchester City.