Boy, 13, is among three people arrested after woman in her 30s was raped in a park

A 13-year-old boy has been arrested by detectives in connection with the rape of a woman in her thirties.

The youngster was among three people to have been arrested by officers from Kent Police.

The victim told police she was attacked by a young man who may have been a teenager.

Detectives say a second man of a similar age was also present at Payers Park in Folkestone, which is in the town centre. The victim’s handbag was also stolen in the attack.

Kent Police are appealing for information about the attack late on the night of Tuesday October 22nd.

Forensic officers were pictured combing the scene the following day.

Police say three people have been arrested in connection with the attack, including the teenager.

A 29-year-old man and a 13-year-old boy, both from Folkestone, were arrested on suspicion of rape. 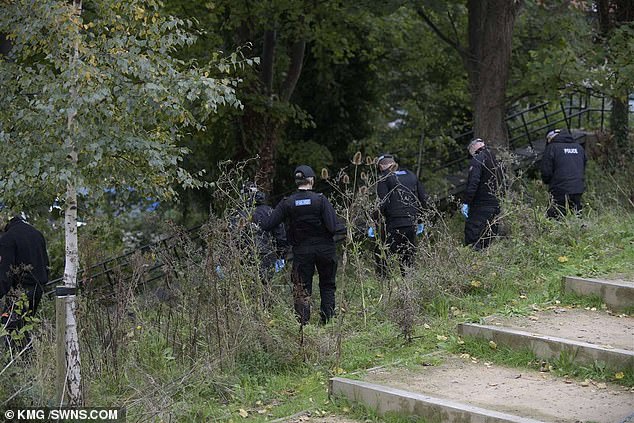 The victim told police (searching the area, pictured above) she was attacked by a young man who may have been a teenager

A 23-year-old woman, also from Folkestone, was arrested on suspicion of theft following a report the victim’s handbag was stolen.

All three have been released on bail.

Detectives say that following a review of available evidence they have identified a man who provided assistance to the victim before leaving the scene when medical crews arrived.

He was described as black, in his early 20s, and around 5ft 10ins with a medium build. He is believed to have been wearing a green winter coat and had hair that was short around the sides and long on top.

Det Sgt Lewis Tompsett said: ‘There is no suggestion this man is in any way involved in the offence, but we know he helped the victim and therefore believe he may have important information that can help us progress with our inquiries.

‘I would therefore encourage him to get in contact with us as soon as possible.’