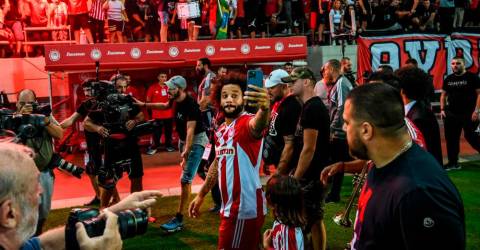 ATHENS: More than 20,000 Olympiakos supporters welcomed Brazilian star Marcelo at their stadium Monday as the Greek champions rolled out the red carpet for the 34-year-old left-back.

Marcelo has joined Olympiakos as a free agent after Real Madrid brought down the curtain on his 16 years at the club.

“I am very happy and satisfied. And my family too. I hope to be here and help the team with great dedication,“ the five-time Champions League winner told the crowd attending his presentation.

The 58-times capped Marcelo is the most successful player in Real’s history being part of teams that won 25 trophies, but he only managed seven starts for them last term.

Olympiakos failed to make it into the Champions League group stage this season and will contest the Europa League instead, facing French side Nantes first in Group G on Thursday.

Marcelo began his career at Fluminense before moving to Real aged 18. He played for Brazil at both the 2014 and 2018 World Cup. – AFP