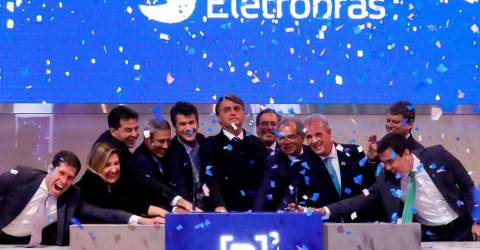 The launch dilutes the Brazilian government’s stake in Eletrobras, Latin America’s biggest electricity company, from 72% to 45%.

It is part of Bolsonaro’s plans to privatise state-run companies en masse – a promise he has largely failed to deliver on nearing the end of his four-year term and facing an uphill battle to win reelection in October.

Economy Minister Paulo Guedes hailed it as a victory for private-sector efficiency.

“The biggest clean-energy generating company in the world is now free,” he said at the event.

“It’s like a child who left home at 18 and is going to go out and triumph. It no longer needs the protection of the state, which was becoming detrimental.”

Bolsonaro grinned and embraced Guedes as a hail of confetti fell, but did not speak at the event.

Critics worry the privatisation could lead to higher bills for customers.

The event drew a small protest by dozens of demonstrators outside the stock exchange.

The state-run firm has drawn the far-right president’s ire with a series of recent price increases that are fuelling high inflation. – AFP