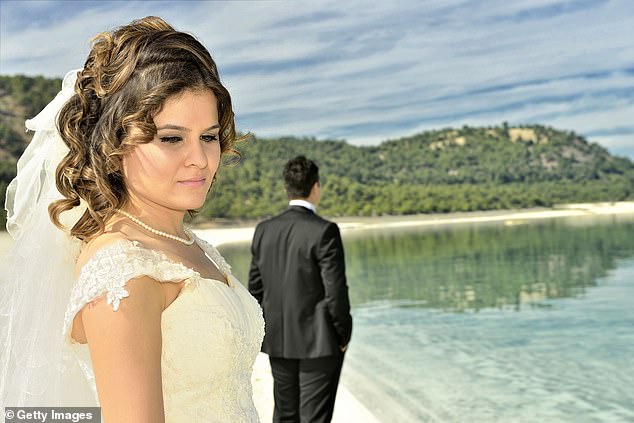 A bride has been blasted after it was revealed that she is planning to host her wedding in the Pacific Islands, at an enormous financial cost to her guests.

The scenario was shared on British parenting forum Mumsnet, by the sister of the bride, who explained that the situation was further complicated by the bride telling her there’s no room in the main villa for anyone else.

She explained: ‘My sister is planning a wedding next year in the Pacific Islands. This is a 30 to 40 hour flight away and will cost my family at least £5,000 in flights alone to get there.

‘We can barely afford this but were happy to go anyway for the experience and the memories. My sister just told me we need our own accommodation as there is no longer room for us in the main villa.

A bridezilla has caused her sister a dilemma, after planning a destination wedding with hugely expensive flights and not saving space for her sister in the main accommodation (stock image)

‘We have been suggested to stay half a mile away. It’s probably important to mention we have two children under 6 and there are no cars on this part of the island.’

She continued: ‘This change was enough for me to reconsider going but my brother (broke, single father) and parents are going and think we just need to suck it up and go.

‘The thing that really bothers me is that when my husband and I were planning a wedding in Thailand 10 years ago (he is Australian, so it was in middle for both our families), we were told we were being selfish and the wedding must be in my home town if we wanted my parents to come.

‘My sister and future brother in law acknowledged all the stress we went through planning our wedding and trying to keep everyone happy. 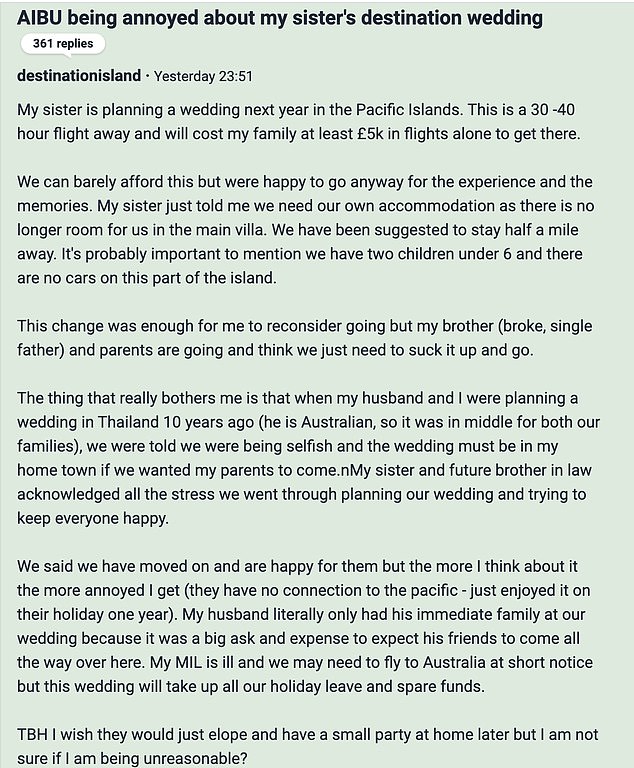 An anonymous poster, believed to be UK-based, took to Mumsnet to share her dilemma over her sister’s destination wedding

‘We said we have moved on and are happy for them but the more I think about it the more annoyed I get (they have no connection to the pacific – just enjoyed it on their holiday one year).

‘My husband literally only had his immediate family at our wedding because it was a big ask and expense to expect his friends to come all the way over here.

‘My MIL is ill and we may need to fly to Australia at short notice but this wedding will take up all our holiday leave and spare funds.

‘TBH I wish they would just elope and have a small party at home later but I am not sure if I am being unreasonable?’

Many people who commented on the post said the poster should decline the invitation, with one calling it ‘unreasonable’

The post prompted many respondents to agree that the bride was expecting an unreasonable amount from guests.

One wrote: ‘It’s their choice to marry there which is fine but they can’t expect you to spend so much money to attend . Anyone I know who has married abroad has had a party on return. Honestly I wouldn’t felt guilty at all about not going.’

Another agreed, adding: ‘If people insist on a destination wedding they have to be prepared to accept that not everyone can come.

‘Just say sorry you can’t afford it and frankly if I were you I would not be able to stop myself from reminding them how they reacted to your original wedding plans.’

And a third wrote: ‘They are being totally unreasonable, 3 flights each way with small children? Horrendous for all of you, never mind the cost.

‘Where did this insane idea of far-flung weddings come from? Madness.’

A further respondent suggested: ‘I’d literally say you can’t afford it. If your parents or sister really want you there they can may for your to attend.’

And another agreed, writing: Don’t go. For all the reasons others have given. I realise you’ll face family pressure but really destination weddings imo are a bit of assumption in terms of time and expense. As other op said, take them for dinner.’

A third went further, stating: ‘She is being a Bridezilla and you are not being unreasonable. I would send my regrets saying the worry about finding suitable accommodation and the additional cost has proved the final straw. What an entitled cow she is.’

Numerous respondents felt that the poster shouldn’t have to go – and many provided reasons as to why declining the invitation would be fair, notably, cost

Meanwhile, others suggested reasons the poster could use to explain their non-attendance.

One wrote: ‘I wouldn’t go and it’s best to say now; your family’s budget is a fair reason and also the need to visit your husband’s family at some point.’

Another added: ‘I would pull out. It’s just too much to expect of you. If DH’S mother is unwell I’d be prioritising the possible trip to see her and keeping the money aside for that.

‘The situation with the villa would tip the scales for me as I’d strongly suspect my presence isn’t top of the couple’s wishlist!’

And a third wrote: ‘Just decline and say you can’t afford it – I’d do it now though allowing as much notice as possible.’

If you enjoyed this story…