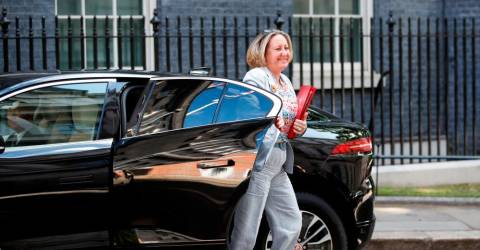 LONDON: Britain’s parliamentary trade committee has warned the government against overselling its post-Brexit trade deals, citing shortcomings in its agreement with Australia and calling for more time for lawmakers to scrutinise it.

Britain has negotiated free trade agreements with Australia and New Zealand, and is in negotiations for trade deals with Canada, India and Mexico.

The International Trade Committee said in a report published today the deal with Australia saw significant concessions given without Britain securing all possible benefits in return.

“The government must level with the public – this trade deal will not have the transformative effects ministers would like to claim,” chair of the committee Angus MacNeil, a Scottish National Party lawmaker, said.

“As the first wholly new trade deal since Brexit, this agreement sets a precedent for the future. It is vital that the government learns from this experience and negotiates harder next time around to maximise gains and minimise losses for all economic sectors and parts of the UK.”

The committee said farmers were concerned that the lifting of almost all tariffs on agricultural imports came with insufficient protections for the sector, while the benefits for customers were unlikely to be noticeable.

Trade minister Anne-Marie Trevelyan will appear in front of the committee to face questions on the deal today, after pulling out of an appearance last week due to a clash with an announcement on steel tariffs.

The committee said it had to publish its appraisal of the Australia trade deal before hearing from Trevelyan because of the limited time allowed for parliamentary scrutiny of the deal.

Although parliament cannot block the ratification of the trade deal, it said it would call for a vote to delay its implementation if the government refused to extend the scrutiny period.

The government said the trade deal did not compromise Britain’s environmental or food safety standards.

Britain has said the deal is expected to unlock annual bilateral trade worth £10.4 billion (RM55.4 billion).

The deal with Australia is seen as low hanging fruit amid more difficult free trade talks with the United States. – Reuters, AFP