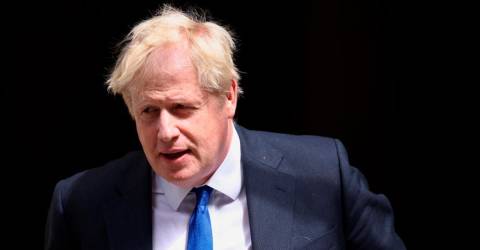 LONDON: British Prime Minister Boris Johnson (pix) defied growing calls for him to step down on Wednesday, telling lawmakers he would “keep going” following a wave of resignations from his government including those of two key ministers.

Johnson made the remarks in parliament in response to a question from a lawmaker in his own party who asked if the prime minister thought there were any circumstances in which he should resign.

“Clearly, if there were circumstances in which I felt it was impossible for the government to go on and discharge the mandate that we’ve been given, or if I felt, for instance, that we were being frustrated in our desire to support the Ukrainian people … then I would,“ Johnson told parliament.

“But frankly, the job of a prime minister in difficult circumstances when you’ve been handed a colossal mandate is to keep going,“ Johnson said. “And that’s what I’m going to do.” — Reuters