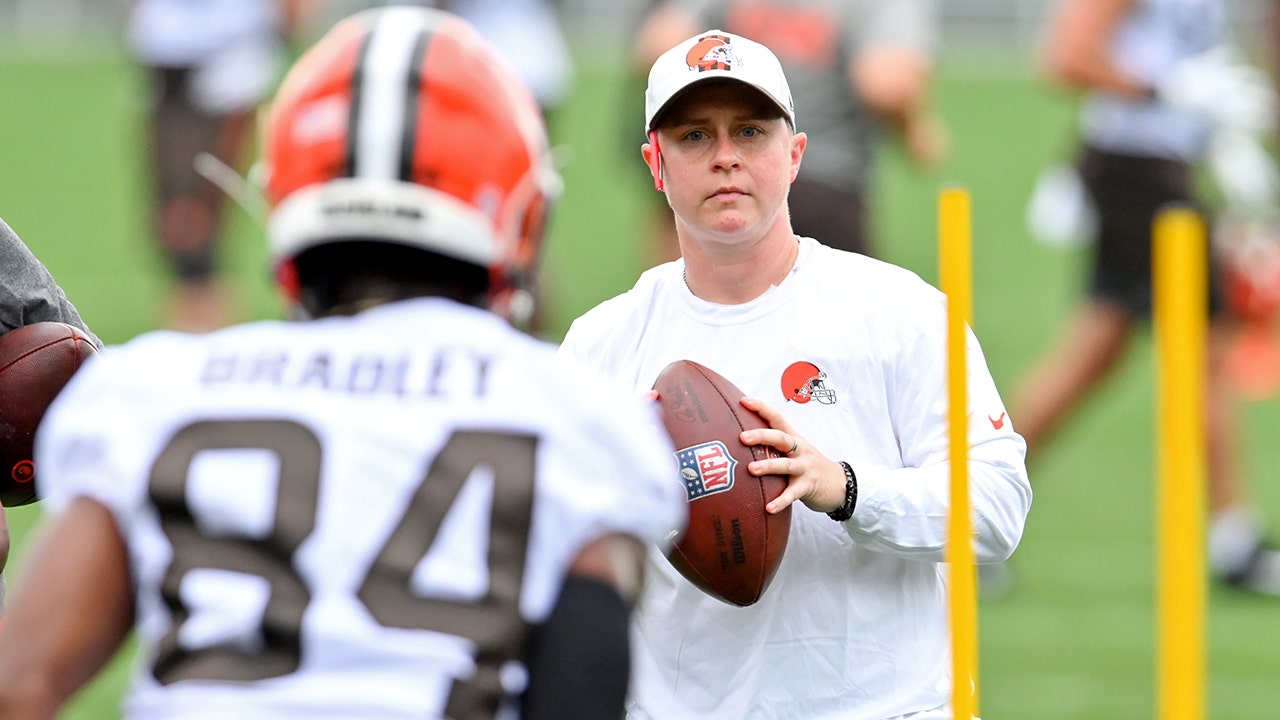 Brownson currently serves on head coach Kevin Stefanski’s team as the chief of staff. She’s held the position since last season. She also served as a coach for the Buffalo Bills and New York Jets and in college for Dartmouth between 2017 and 2021.

“USA Football has made a tremendous selection in Callie,” Stefanski said in a news release. “In addition to the honor that comes with representing the United States, this is an exciting professional development opportunity, which I encourage for everyone on our coaching staff. Callie and USA Football have our full support.”

Brownson also has earned top achievements at the playing level as well.

She played for the D.C. Divas of the Women’s Football Alliance from 2010 to 2017 and won two championships with the league. She also won gold medals as a member of the women’s national football team in the IFAF Women’s World Championship.

Tight end coach Callie Brownson of the Cleveland Browns looks on in the second quarter against the New York Jets on Dec. 27, 2020, in East Rutherford, New Jersey.
(Sarah Stier/Getty Images)

“This is a remarkable opportunity not only for me, but for every woman who will earn a place on our U.S. National Team next year,” Brownson said. “I know first-hand of the exceptional brand of football that is played globally by elite female athletes and am honored to lead our team of Americans. I appreciate USA Football’s continued trust in me and am grateful for Coach Stefanski and the Browns for their support. This enriching experience will only advance my contributions to our players and coaching staff in Cleveland.”

She will lead the U.S. team and a roster of 45 players and seven assistant coaches to compete in the IFAF Women’s Tackle World Championship. It will be the fourth time it is being held and first time since 2017.

“A world-class team needs a world-class coach, and that’s what we have in Callie Brownson,” USA Football CEO Scott Hallenbeck said. “Callie is a longtime USA Football family member whose coaching acumen, knowledge and familiarity with the international game makes her an ideal fit to lead our team in Finland next summer. I thank Coach Stefanski and the Browns for giving us permission to have Callie lead our national team.”

Callie Brownson assists in a drill during the second day of Cleveland Browns training camp on July 29, 2021, in Berea, Ohio.
(Nick Cammett/Diamond Images via Getty Images)

Eight teams will compete for the world title in Vantaa, Finland, from July 27 to Aug. 8.

The U.S. won gold in each of the three previous competitions.