Brussels is considering a plan to extend the Brexit transition period beyond the end of next year that would keep the UK tied to EU rules, it was reported tonight.

Boris Johnson ran his election campaign with a pledge to have a trade deal with Europe in place by December 2020 when the buffer period is due to cease.

He says he will refuse to extend it any further but EU politicians are considering asking for it to be pushed back themselves.

They believe that with Mr Johnson’s Brexit Deal due to be ratified in January, 11 months is not long enough to do a deal, the Guardian reported.

Any extension period would see the UK continue to obey EU trade rules until they are over-written by a new deal, something likely to prove explosively unpopular to Brexiteers.

It came after German chancellor Angela Merkel cautioned on Friday, after the election result, that concluding a deal on the UK’s future relationship with the European Union would  be ‘very complicated.’ 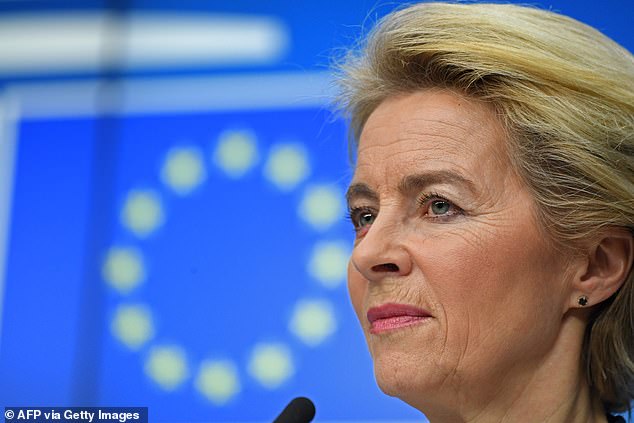 The head of the European Commission, Ursula von der Leyen, said the one-year time frame for striking a post-Brexit trade deal was ‘challenging’

News of Prime Minister Boris Johnson’s convincing victory emerged as EU leaders were gathered at a summit in Brussels.

Mrs Merkel said ‘many were glad that this was a clear result and not another hung parliament where we couldn’t move forward or backward.’

She added that Britain’s EU allies all regret its departure, but a no-deal departure is ‘no longer a reality, and that’s a big achievement if I remember our situation three months ago.’

She said ‘it is good to have a prime minister who has a strong mandate.’

The chancellor noted that, once Britain leaves in the coming weeks, time will be short to negotiate on a wide range of issues.

Since Britain doesn’t want to extend a transition period beyond the end of next year, she said that ‘what will matter above all is that we work very quickly and precisely.’

The head of the European Commission, Ursula von der Leyen, said the one-year time frame for striking a post-Brexit trade deal was  ‘challenging’.

After the victory of Boris Johnson’s Conservative party in the British election, von der Leyen said, ‘We are ready to move to the next phase.’

Raoul Ruparel, former prime minister Theresa May’s special adviser on Europe, said an agreement with the EU can be done next year, but may be limited in ambition due to the short time frame.

Speaking on BBC Radio 4’s Today Programme, he said: ‘I think it is possible to get a free trade agreement in place that looks at quite standard provisions on level playing fields, such as the type that the EU have done with other countries, and also offers zero tariffs.

‘But I think what it’s harder to do, is what Philippe Lamberts was alluding to, is removing the regulatory barriers and the checks behind the border which would require some level of alignment of rules.

‘And I think at the moment, despite his large majority, I don’t think that’s the sort of deal that Boris Johnson envisages, and it’s something that he’s consistently fought against.’

On whether there is a prospect that the UK could leave without an agreement, he said: ‘I think it is possible to get something done in the next year but I think it does limit, the short time frame does limit the level of ambition potentially, because you would be looking at a narrower and shallower deal that you might have otherwise envisaged given the speed needed.’