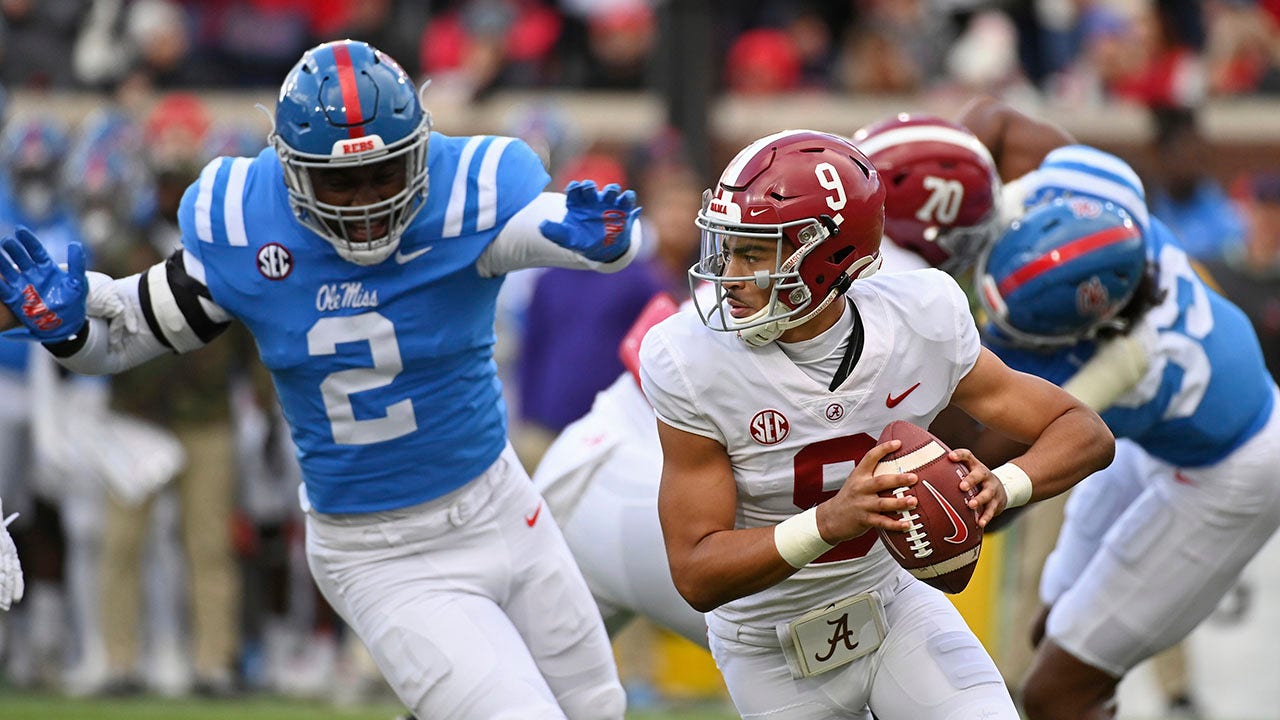 At one point in the game, ninth-ranked Alabama scored on four straight possessions and won 30-24 in Oxford coming off an overtime loss to the LSU Tigers.

Alabama’s defense forced an incomplete pass on fourth down with less than one minute remaining to secure the win.

Alabama quarterback Bryce Young (9) looks to pass during the first half of a game against Mississippi in Oxford, Miss., Saturday, Nov. 12, 2022.
(AP Photo/Thomas Graning)

Alabama’s offense had a total of 317 yards on the night.

Judkins highlighted the game’s final drive with runs of 35 and 13 yards to get the Rebels into the red zone. The Rebels failed to convert in the red zone to take the lead late in the fourth quarter.

Alabama scored in all four of its trips in the red zone.

Malik Heath (8) of the Mississippi Rebels carries the ball against Terrion Arnold (3) of the Alabama Crimson Tide during the first half at Vaught-Hemingway Stadium Nov. 12, 2022, in Oxford, Miss.
(Justin Ford/Getty Images)

Alabama was in search of a win to avoid its first back-to-back losses since 2013. The victory also allowed the Crimson Tide to extend their seven-game winning streak over Ole Miss.

Nick Saban’s team remains in position to have a 10-win season. The program has not endured a three-loss season since 2010.

Cameron Latu (81) of the Alabama Crimson Tide catches a touchdown during the first half against the Mississippi Rebels at Vaught-Hemingway Stadium Nov. 12, 2022, in Oxford, Miss.
(Justin Ford/Getty Images)

The loss dropped Ole Miss to 8-2 and ended its hopes of representing the SEC West in the conference championship game Dec. 4.

But the Rebels can still win 10 games for the second straight season. Alabama needs Texas A&M to defeat LSU in their regular season finale to have a chance of winning the division.

Even without an appearance in the SEC Championship game or the College Football Playoff, the Crimson Tide can end their season with a prominent bowl game and a high ranking.

Chantz Martin is a sports writer for Fox News Digital.