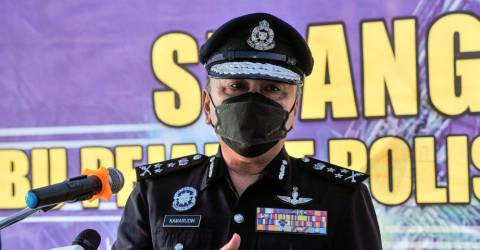 He said the syndicates continued their illegal activities as there was still a demand for such loans.

“Police are still tracking down the job offers made by the syndicates to borrowers.

“We have detected two cases of such job offers in Sabah made to individuals who could not get approval to borrow money and could not settle the debt, respectively,” he said in a statement today.

Mohd Kamarudin said those who could not get approval to borrow money from the Ah Long would be offered jobs as paint splashers or to deliver threat notices, and they would be paid for their work.

“As a preventive measure, the public is advised not to take loans from any unlicensed money lender,“ he said.

Mohd Kamarudin also advised the public not to work or help these unlicensed money lenders to commit disturbances or mischief even if they were coerced to do so.

“Colluding with these syndicates, whether voluntarily or under duress to harass or commit mischief can be investigated under Sections 5 (2) and 29b (1) of the Money Lenders Act 1951 which involve conducting money lending activities without a licence and disturbing the borrowers respectively,” he said. — Bernama