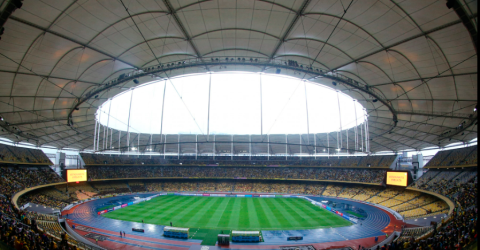 Besides the AFF Cup, Football Association of Malaysia (FAM) secretary-general Noor Azman Rahman said the Tier 1 international friendly match against Cambodia on Dec 9 as a preparation for the team coached by Kim Pan Gon ahead of the most prestigious football competition in Southeast Asia will also take place at the same venue .

Thus, Noor Azman thanked Youth and Sports Minister Datuk Seri Ahmad Faizal Azumu for his concern and agreement to allow the use of the Bukit Jalil National Stadium as the ‘Home of Harimanu Malaya’ for the 2022 AFF Cup competition.

“We are aware of the condition of the pitch at the National Stadium and will take steps together with the Malaysia Stadium Corporation (PSM) in an effort to ensure the quality of the pitch is at a satisfactory level for the matches scheduled.

“To the supporters of Harimau Malaya, we hope that the aura of the National Stadium prevalent during the 2023 Asian Cup Qualifiers last June will be able to continue in the upcoming matches,“ he said in a statement today.

Malaysia are drawn in Group B with Vietnam, Singapore, Myanmar and Laos in the competition which will end on Jan 16 next year.

For the competition this time, Malaysia will host Laos on Dec 24 and Singapore on Jan 3.

Harimau Malaya will also have the opportunity to play at the Bukit Jalil National Stadium if they qualify for the semi-finals which will be held reciprocally on Jan 6 or 7 and Jan 9 or 10.

Meanwhile, Noor Azman also stated that another Tier 1 international friendly match between Malaysia and the Maldives will take place at the Kuala Lumpur Football Stadium, Cheras on Dec 14. – Bernama