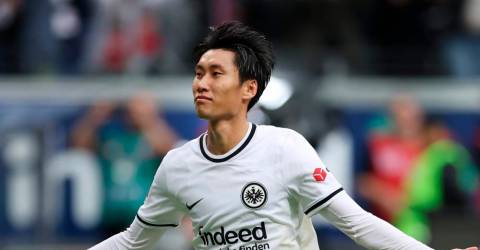 Japan’s squad for the finals in Qatar includes eight Germany-based players, more than any other national league – including Japan’s first-division J1 League.

Nine Japanese players play in the first division of the Bundesliga, seven of which have been selected in the squad for Qatar. Qatar-bound midfielder Ao Tanaka also plays in Germany, for Fortuna Duesseldorf in the second division.

Kamada, 26, who has 12 goals in all competitions for Frankfurt this season, will be one of Japan’s most important players in Qatar.

“There are a lot of Japanese players in the Bundesliga now and I think we’re on an equal footing with them (the German national team) now,“ Kamada told AFP.

“It was strange to be playing against players I had only watched before, but… I think it has a big effect on us mentally to be sharing the same stage as them.”

“There are not only players playing in Germany, but also in the five major leagues at a high level, and well, I think we can compete with the 26 players (in our squad)” Doan told AFP.

“I think it is positive that all the players are competing not only in the Bundesliga but generally at a high level.”

The high representation of Japanese players in Germany is more than just a statistical quirk.

Germany has a long history of scouting and recruiting Japanese players, dating back to 1977, when Yasuhiko Okudera made his debut for Cologne, becoming the first Japanese footballer to play professionally in Europe.

Okudera told AFP a lot had changed since his decade-long stint with Cologne, Hertha Berlin and Werder Bremen, namely that Japanese players had proven their ability to compete at the highest level.

“In those days, it was a lot stricter… it was hard to get in,“ Okudera said.

“Now (the Bundesliga) has become a place where we can compete on the same pitch as players from Africa, South/Central America and the rest of the world.”

Japan and Germany play each other in Group E’s first fixture on November 23, but whether playing week in and week out against many of their opponents would be an advantage remains to be seen.

Okudera said Japan’s familiarity with Germany and the Bundesliga would “be an advantage”, but may also favour Germany.

“On the one hand, it will be an advantage, and on the other hand, the other side knows us (better).”

Japan captain Maya Yoshida, who joined Schalke in the summer, told AFP: “I’m not sure if it will or not (be an advantage).”

“I think it is good that we understand German, like for set plays and so on.

Yoshida, who made the move from Serie A’s Sampdoria to Schalke in the summer, joked that his move to the Bundesliga may have been made with the World Cup in mind.

“That’s the reason why I play here,“ Yoshida said.-AFP