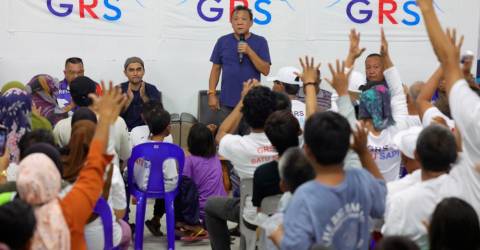 He said these errant leaders included state assemblymen and members of the GRS-BN state administration.

“I urge Sabah Chief Minister Datuk Seri Hajiji Noor, in his capacity as GRS chairman, to take the appropriate action against those who sabotage GRS-BN candidates to deny them victory.

“If action is not taken, ties between BN and GRS may not be as strong as before,” he told reporters after attending a programme with the people here today.

Bung Moktar said leaving this matter unchecked would lead to misunderstanding between the two coalitions and cause followers of these errant leaders to disrespect the coalitions’ leaderships.

On incumbent Beluran MP Datuk Seri Dr Ronald Kiandee’s action in defending the seat on a Perikatan Nasional (PN) ticket against BN’s candidate, Bung Moktar said Ronald did not breach the agreement between GRS and BN.

He believes the five-term MP would give a strong fight to BN’s Benedict Asmat.

In LIBARAN, Bung Moktar urged the BN machinery to ensure that its candidate Datuk Suhaimi Nasir would score a handsome victory on Nov 19.

He said BN had not lost the Libaran parliamentary constituency since it was created in 1995 although a former BN MP did leave the party after winning the seat.

He was confident that the seat would return to BN through the hard work of its candidate and the cooperation of GRS.-Bernama