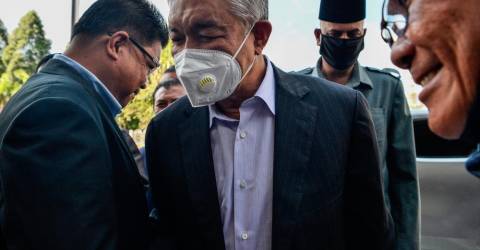 Ahmad Zahid, 69, said that Lee, who is the founder and chairman of Country Heights Holdings Berhad, offered to sell the bungalow below the market price because he was having trouble paying his income tax.

“This offer (price) is from Tan Sri Lee Kim Yew, the owner of Country Heights. He desperately needed the money, which was why he sold it below market price.

“He was having trouble paying income tax, that’s why the time given to us was very short and the discount price was given to Yayasan Akalbudi (YAB),” he said.

He said this when referred by deputy public prosecutor, Harris Ong Mohd Jeffery Ong, to the ledger of YAB’s trustee, Messrs Lewis & Co, which recorded that the law firm deposited RM2 million into a fixed deposit account on Nov 30, 2016, and RM5 million on Dec 9 in the same year.

According to Ahmad Zahid, Lewis & Co did not wait for the fixed savings account to reach maturity, of either six months or a year, before withdrawing RM5.9 million, because Lee gave a short period of time to make a decision on the purchase of the bungalows.

Ahmad Zahid, who is also Member of Parliament for Bagan Datuk, did not agree with Harris Ong’s suggestion that the purchase of the bungalows was not on a charity basis, but to help the owner only.

According to Lee, the cheque was for the payment of sales settlement for two single-storey bungalows belonging to his company which were sold to Yayasan Al-Falah, of which Mohamad Nasaee is the chairman of the foundation’s board of trustees.

Meanwhile, lawyer Hisyam Teh Poh Teik, who represented Ahmad Zahid, told the court that the prosecution and defence had agreed to visit the two bungalows on Aug 1, as acceded by Judge Datuk Collin Lawrence Sequerah yesterday.

“I also invited Your Honour to Bagan Datuk to visit the Tuminah Hamidi Mosque, to give a clear picture of the condition of the mosque,” said Hisyam.

Judge Sequerah later said that the condition of the mosque could be shown in court through photos or videos because the journey to Bagan Datuk would take time.

Yesterday, Judge Sequerah acceded to the defence’s request to visit the bungalow for the sake of justice in the trial of the case.

On Jan 24, the court ordered Ahmad Zahid to enter his defence on 47 charges, with 12 of them involving criminal breach of trust, eight charges of corruption and 27 money laundering involving tens of millions of ringgit of funds belonging to YAB.

The trial before Judge Sequerah continues on Aug 5. — Bernama