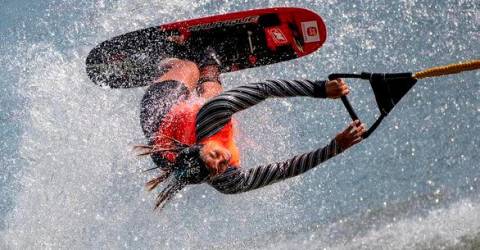 The 19-year-old said her good form was certainly a sign of better things to come, especially as she gears up for the Oceania Championships in Mulwala, Australia, from Nov 17-20 and the World Under-21 Championships next year.

Aaliyah was super excited about her four-gold achievement in the Asian meet in South Korea as she also achieved the same feat in the 2019.

However, she said that this year’s achievement felt a bit more special as it was full of challenges, including extreme weather conditions like strong winds, rain and currents.

“It’s definitely a much more satisfying achievement as I had to not only beat strong competitors but also beat the weather elements whilst familiarising myself with an unfamiliar (tow) boat,” she said in a statement today.

Aaliyah said that she’s hoping to do well again in all events at the Oceania Championships in November and get on the podium for tricks and overall at the World Under-21 Championships.

She then continued her impressive performance in the women’s Open jump on Saturday as she produced a leap of 40.6 metres (m) in the preliminaries and 37.2m in the final round to capture another gold.

The teenager also was dominant in the women’s slalom, with marks of 0.00/55kmh/13m for her third gold before taking the overall title with a total of 3000.00 points for her fourth gold medal the same day. – Bernama