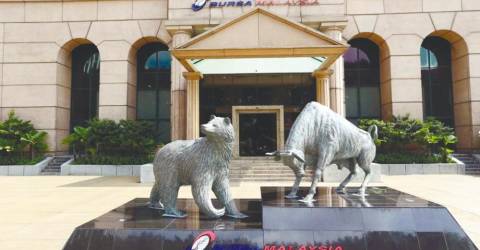 PETALING JAYA: Bursa Malaysia Bhd’s net profit fell 44% to RM67.97 million in the first quarter ended March 31, 2022 from RM121.39 million reported in the same quarter of the previous year, attributed to a lower operating revenue due to a decline in securities trading revenue.

The securities market segment saw a 40.2% decline in profit to RM104.4 million in Q1’22 from RM174.6 million Q1’21 due to lower revenue, while its derivatives market segment posted a RM12.9 million profit for the quarter from RM11.6 million reported previously on the back of higher revenue.

In addition, Bursa’s exchange holding company saw a lower loss of RM4.3 million for the quarter against RM5.1 million reported previously due to lower corporate social responsibility expenses and its others segment saw a 22% hike in profit of RM2.1 million from RM1.7 million.

Its overhead rose by 12.3% to RM22.5 million from RM20 million in Q1’21 mainly due to higher depreciation and amortisation of assets.

On the results, Bursa CEO Datuk Umar Swift pointed out that the average daily trading value of securities continued to normalise to pre-pandemic levels which contributed to the decline in profit for the quarter.

“However, profit after tax is 4.6% higher than the fourth quarter ended Dec 31, 2021 of RM65million, mainly contributed by a 2.8% higher average daily trading value registered this quarter.

“However, with the reopening of the economy and international borders, Bank Negara Malaysia expects Malaysia’s growth forecast to be between 5.3% to 6.3%. As such, better economic growth can be expected as the nation moves towards the endemic phase, and we anticipate more trading opportunities for investors due to movements in CPO prices, interest rate policies and the FBM KLCI,” he said in a statement.

Umar revealed that to sustain the interest of global investors, the bourse will continue to enhance the attractiveness of listed issuers through initiatives such as the Public Listed Companies Transformation programme launched earlier this year.

“Further, and in line with the Sustainable and Responsible Investment and environmental social governance agendas, the exchange will continue to deliver new product and service offerings as well as the new voluntary carbon trading platform, which will enhance the breadth and depth of the ecosystem.”