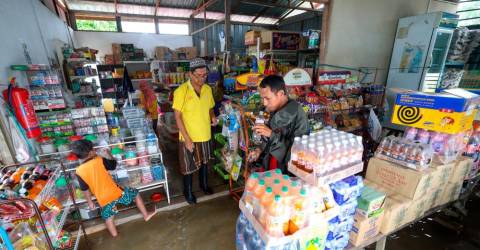 PASIR MAS: It is business as usual for a grocery store owner in Kampung Lumpur here, despite his shop was inundated by 0.3m-high floodwaters.

Muhamad Syabudin Mat Ghani, 45, said the decision to continue operations was made not only for profit, but also because he understands the difficulties faced by residents in obtaining daily necessities during the floods.

“If I close my shop, it will be difficult for villagers to find what they need. We still have stocks, it is just a bit difficult to get new stocks of goods because the floods have cut off access to this village,” he told Bernama today.

According to Muhamad Syabudin, he managed to move the items in his shop to a higher place after the village was flooded at around 10.30 am yesterday.

He was also grateful that his shop was not badly affected by the floods as it was located on higher ground.

However, Muhamad Syabudin said his house, which is located behind the shop, was flooded up to one metre deep forcing him to spend the night at his sister’s house, not far from his grocery store.

Salmizan Yusof, 39, an employee of a grocery store in Kampung Pohon Tanjung, here, said despite the increase in demand from local residents, essential items at the shop were still sold according to the prices set previously.

“At the moment, we are open from 8 am as usual and the prices of the goods have remained the same, they have not been increased.

“Fortunately, not many goods were damaged even though the water is at knee depth because we had time to move them to a safer place,” he said.-Bernama