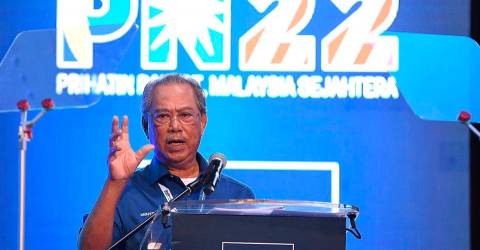 PUTRAJAYA: Perikatan Nasional’s call for the Opposition to consider renegotiating political cooperation is one made in the interests of Malaysia’s future and its people and not the coalition, its chairman Tan Sri Muhyiddin Yassin said today.

The former prime minister, who is currently National Recovery Council (MPN) chairman, said this was to save the country from falling further into kleptocracy, corruption and abuse of power.

“This call stems from the concerns currently voiced by the people. It is not made in PN’s political interests or to win the 15th general election (GE15),” Muhyiddin said after chairing an MPN meeting here today.

In his speech at the PN convention on Saturday, Muhyiddin called on Opposition party leaders to reconsider cooperation with PN during GE15.

Asked about Rafizi Ramli’s statement that Pakatan Harapan (PH) will not cooperate with PN, Muhyiddin, who is Bersatu president, said it was merely the PKR deputy president’s personal opinion.

“What I have read so far, the one rejecting cooperation is Rafizi alone. It is alright, we will accept his views. However, political cooperation can bring together parties to offer what is best for the people,” he said.

Muhyiddin said Bersatu was ready to face eventualities in GE15, including the possibility of facing multi-cornered contests. – Bernama