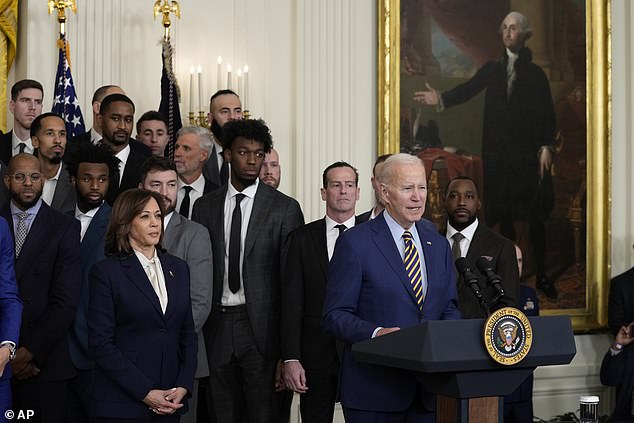 ‘Cam-a-la’: Biden stumbles over pronunciation of the Vice President’s name (but at least he didn’t call her President!)

Joe Biden, 80, forgot how to pronounce his own vice president’s name during a speech recognizing the Golden State Warriors for the NBA Championship win.

The President pronounced Vice President Kamala Harris‘ first name as ‘CAM-a-la’ rather than the correct pronunciation of ‘COMMA-la’.

While people frequently mispronounce the vice president’s first name, it is usually not in the manner in which the president did. The most frequent incorrect way to say Harris’ first name includes a gaffe in the inflection, which results in ‘COME-a-la.’

‘As Kamala said, we’re all closely monitoring the storms, the floods, the landslides all across California,’ Biden said as he mispronounced his 58-year-old second-in-command’s name.

President Joe Biden mispronounced his Vice President’s name on Tuesday, calling her ‘CAM-a’la’ rather than the correct pronunciation of ‘COMMA-la’

The name Kamala was inspired by her mother’s South Indian heritage – and Harris set the record straight on how to say her name several times.

In a video from her 2016 Senate campaign, Harris released a video that featured children saying her name in incorrect ways and then the correct way.

In a 2019 memoir, Harris wrote: ‘[M]y name is pronounced ‘comma-la,’ like the punctuation mark. It means ‘lotus flower,’ which is a symbol of significance in Indian culture.’

Biden’s gaffe Tuesday came as the president and vice president hosted the NBA champion Golden State Warriors with a celebration at the White House.

As the oldest-ever U.S. president, Republicans have often questioned whether Biden has the mental acuity or physical fitness to continue serving as commander-in-chief. 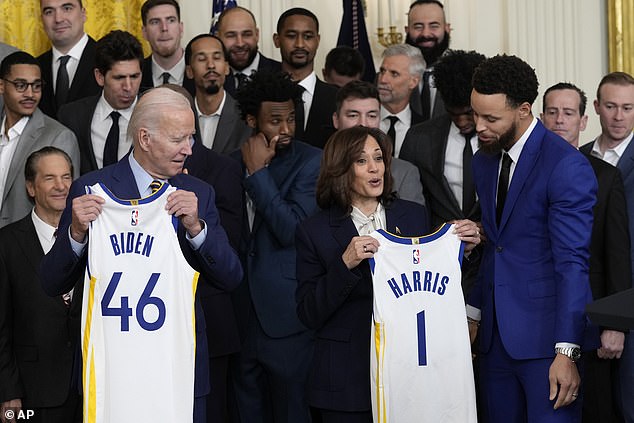 Defenders of Biden claim that he is just prone to gaffes and have pointed to his chronic stutter, which he says was worse as a child.

Biden has not backed down from suggestions that he is preparing to launch a reelection campaign for the 2024 race – and that he would run again with his current VP.

But the Tuesday mistake isn’t the first time that Biden has stumbled when talking about his vice president – and he has now twice referred to her as the president.

Earlier this month during a press conference previewing his trip to the southern border, Biden said: ‘President Harris led this effort to make this better in the countries from which they are leaving.’

While everyone makes mistakes, this was at least the second time that Biden has made this slip-up.

‘Happy birthday to a great president,’ Biden said in October 2022 when he was wishing his No. 2 a happy birthday during a Diwali celebration.

Martin Luther King III’s wife Arndrea Waters King’s birthday fell on MLK Day this year, so Biden said during remarks at the breakfast that he wanted to sing her the Happy Birthday song.

When it came time to put her name into the song’s verse, Biden instead mumbled over the microphone and appeared to begin to say the name ‘Valerie.’ There was laughter throughout the room.