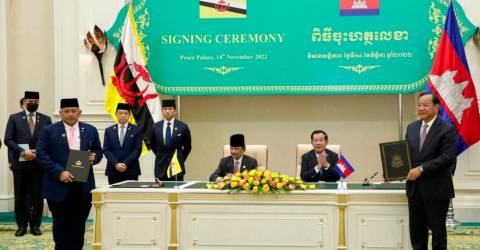 PHNOM PENH: Cambodia and Brunei on Monday vowed to reinforce their bilateral relations and cooperation for mutual benefits, according to a joint statement.

The statement was issued at the end of a one-day state visit of Brunei’s Sultan Haji Hassanal Bolkiah to Cambodia, as the two countries marked the 30th anniversary of the establishment of diplomatic relations this year, Xinhua reported.

During the visit, the Sultan had a meeting with Cambodian King Norodom Sihamoni, and also met with Cambodian Prime Minister Samdech Techo Hun Sen, the statement said.

The Sultan and Hun Sen had fruitful discussions on a wide range of bilateral cooperation and exchanged views on regional and international issues of common concern, it added.

“Both sides also expressed their strong commitment to reinforce ties of friendship and enhance bilateral cooperation in areas such as defence and security, trade and investment, energy, education and human resource development, culture, tourism, information and communication technology, and public health,“ the statement said.

“The two leaders agreed to further consolidate defence and security cooperation through exchanges of information on terrorism and transnational crimes and senior level defence personnel, capacity building projects and the possible signing of a memorandum of understanding on defence cooperation,“ it added.

Both leaders were determined to bolster the two countries’ two-way trade and investment by encouraging the private sector to explore more business opportunities in various potential areas and ensuring effective implementation of an agreement on avoidance of double taxation.

The Cambodian side encouraged direct investment from Brunei to jointly develop agro-processing and knowledge-based industries, the statement said, adding that both leaders agreed to expand cooperation in emerging areas such as green and digital economy.

Both leaders also emphasised the importance of Asean centrality and unity to address common challenges and advance Asean’s community-building efforts, it added.

At the end of the meeting, the two leaders witnessed the signing of a memorandum of understanding between the two governments on bilateral consultations. – Bernama