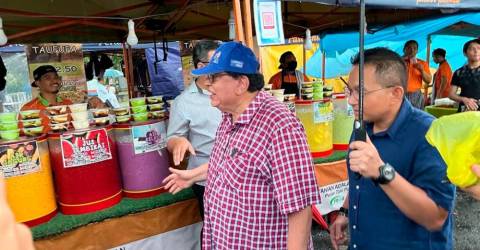 PUTRAJAYA: The Precinct 2 night market here became the centre of attention for candidates vying for the Putrajaya parliamentary seat today as they showed up to meet voters in the federal administrative centre here.

All three candidates were cordial and professional when they bumped into each other along the main route of the night market. The BN campaign machinery had also liven things up at the night market with a van that was playing songs to attract passers-by.

When met by reporters after his walkabout, Tengku Adnan said he intended to increase the number of days for the night market, which sells various fresh produce and also prepared food from two days to three days a week.

“The night market is important as an alternative for people to purchase products at low prices,” he said, adding that his campaign was going on very well.

Radzi, meanwhile said he was hoping to maintain his momentum in meeting Putrajaya residents until polling day.

“Alhamdulillah, the response is good and we are campaigning in harmony,” he said.

Mohd Rosli, who had served in the civil service, said although he was new, residents in Putrajaya seemed to accept him quite positively.

Besides the three candidates, there are two other independents, Lim Fice Bee dan Samsudin Mohamad Fauzi, vying for the Putrajaya seat.-Bernama