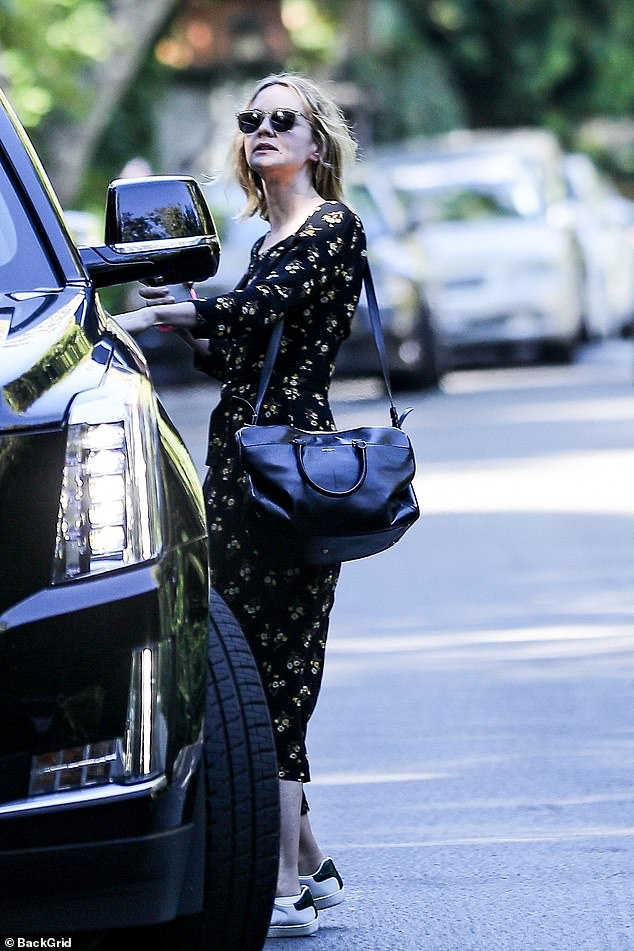 She has spent lockdown with her husband Marcus Mumford and their two children Evelyn and Wilfred.

And Carey Mulligan looked sensational as she stepped out in a stylish floral maxi dress in Los Angeles on Friday.

The Great Gatsby actress, 35, kept things casual for her outing and also donned a pair of white trainers.

Casual: Carey Mulligan looked sensational as she stepped out in a stylish floral maxi dress in Los Angeles on Friday

Carey cut a chic figure in her laid-back dress, which cinched slightly at the waist to emphasise the star’s svelte frame.

She wore her blonde locks down and slightly wavy and appeared to have only added the lightest touch of makeup.

Not forgetting to accessorise, Carey slung a large black leather bag over her body and donned a pair of large sunglasses.

It is believed that Carey had been paying a visit to her pal Bradley Cooper on Friday and was heading off as she walked to her driver’s car. 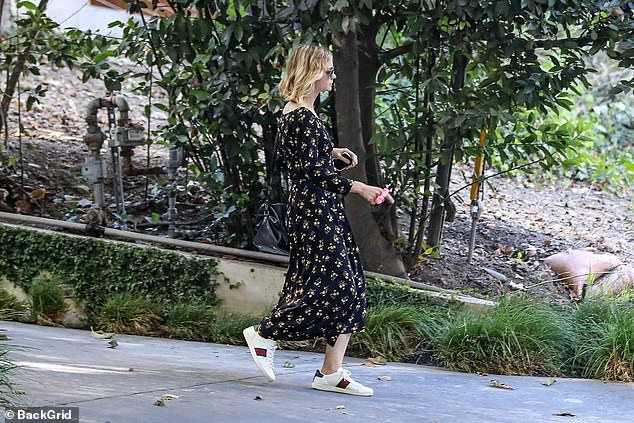 Chic: The actress paired her pretty dress, which cinched slightly at the waist to highlight her svelte frame, with a pair of white trainers

The actress has kept a relatively low profile during the coronavirus pandemic but has been seen around Los Angeles this week running errands.

However during lockdown the star did give an interview to NET-A-PORTER’s digital title, PORTER, in which she discussed her thoughts on #MeToo, life after children and toxic masculinity in her new film Promising Young Woman.

Carey revealed she noticed the positive changes within the TV and film industry when she was given a code of conduct for the first time back in 2017.

The award-winning actress, who shares Evelyn, four, and Wilfred, two, with husband Marcus, 33, also insisted she’s content with juggling her career with her role as a mother, sharing: ‘I haven’t been in a bar in ages, and I’m very glad of that’. 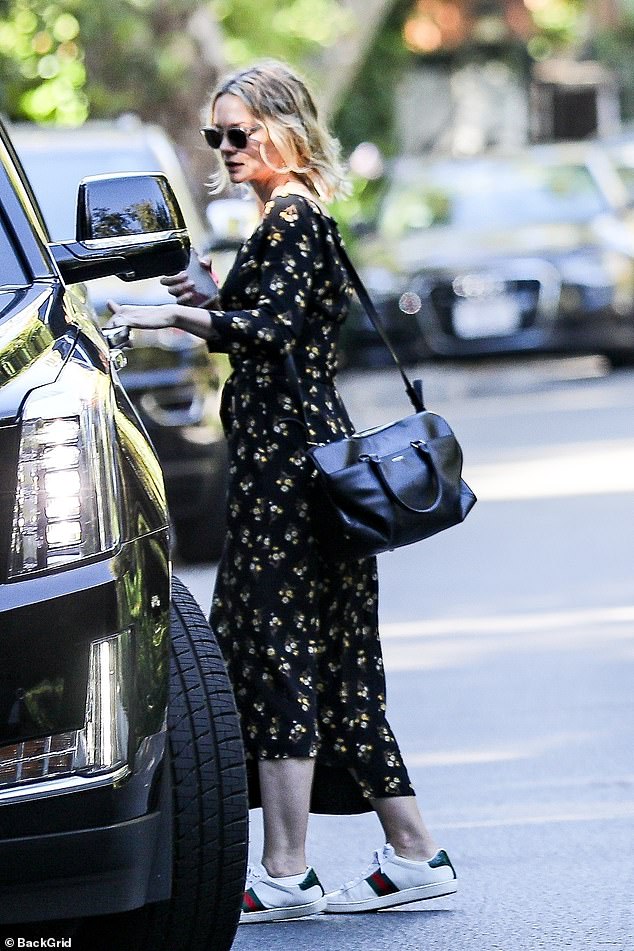 On the go: Carey slung a large black leather bag over her body as she jumped into a vehicle

Carey has been keeping busy promoting her new movie Promising Young Woman, which follows the story of her character Cassie, a barista who feels unfulfilled in her life.

In a bid to lift her spirits, the medical school dropout lets loose at bars every week, where she becomes intoxicated and on the brink of passing out.

During one raucous outing, men who pretend to ‘help’ her end up attempting to take advantage of her drunken state.

The thespian claimed her project, penned and directed by Killing Eve showrunner Emerald Fennell, highlights the importance of awareness surrounding topics such as sexual assault and toxic masculinity. 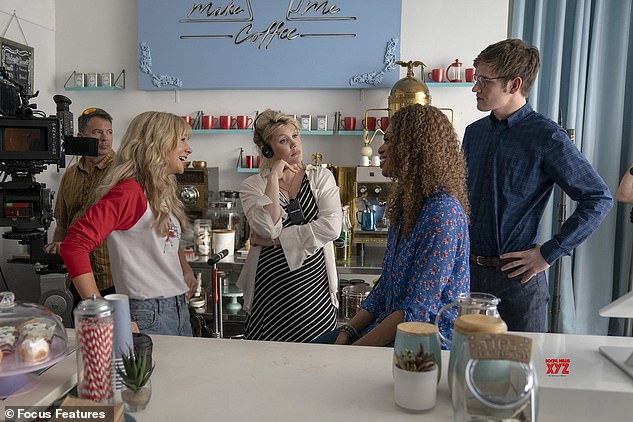 In character: The TV and film star has been keeping busy promoting her new movie, which follows the story of Cassie, a barista who feels unfulfilled in her life (pictured left)

Blonde beauty Carey said: ‘It’s funny, because the reaction I first had when I read the script was, “This is soooo romantic”.

‘[But] Emerald’s [point] was: if [you] take someone home and they are really drunk, and then that person reveals they are not drunk, and you feel guilty, then you know what you are doing isn’t right.’

‘What we reflected on, making this film, was the amount of real-life stories like this we know. A lot of this film is stuff that pretty much every woman I know has experienced in some way. ‘

When asked whether she misses her life before welcoming her kids, the mother-of-two, who wed musician Marcus in April 2012, declared: ‘Noooo.

‘In fact, every time we stepped into a new bar set, Emerald and I would both be like, “God, we haven’t been in a bar in a really long time”. And I’m very glad of that.’ 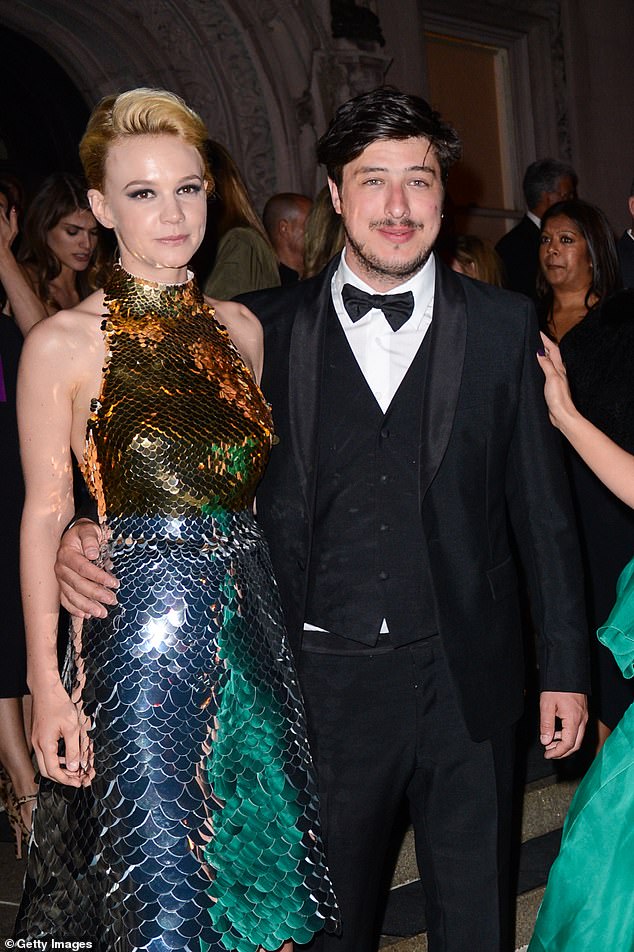