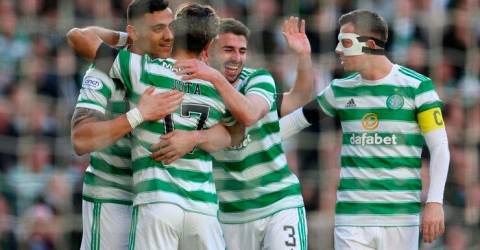 GLASGOW: Celtic inflicted Rangers’ first home league defeat for two years to close in on regaining the Scottish Premiership title with a 2-1 win at Ibrox on Sunday.

Ange Postecoglou’s men extended their lead at the top of the table to six points and a much superior goal difference with just six games to play.

Aaron Ramsey gave Rangers the perfect start, but it was 1-1 after just seven minutes when Tom Rogic swept home to equalise.

Cameron Carter-Vickers then drilled home the winner just before half-time and Celtic held out at the break to move to the brink of not only the title but the automatic qualification for next season’s Champions League it will bring.

“Really proud of the players. It’s a difficult place to come to and they got off to a great start. After that you know it’s going to take a massive effort to turn it around,“ said Postecoglou.

Celtic are now unbeaten in 32 domestic games after losing three of their first six league matches as Postecoglou’s huge overhaul of the squad took time to take shape.

“There is a real steel to this team, a real resilience,“ added Postecoglou. “We lost three in the first six, we were still putting a team together when the league started.”

It was for the Champions League riches that Rangers splashed out to get Ramsey on loan from Juventus in January.

The Welsh international has been blighted by more injury problems during his time in Glasgow, but looked to be coming good at just the right time when he opened the scoring.

Ryan Kent got in behind the Celtic defence and squared for the former Arsenal midfielder to score his first goal at Ibrox.

Celtic did not take long to strike back as Callum McGregor weaved into the Rangers box and after Rogic and Reo Hatate saw shots blocked, Rogic pounced the sweep the ball high into the net.

The visitors then began to take control but it was a scrappy goal that claimed a huge three points as Carter-Vickers smashed in the loose ball after Rangers failed to clear a free-kick into the box.

Celtic will now be confident of completing a domestic treble with another Old Firm clash in the Scottish Cup semi-finals to come in two weeks’ time.

But another frenzied Old Firm atmosphere resulted in a delay to the start of the second half as a broken glass bottle had to be cleared away from the Celtic box.

Once the action got back underway, it fizzled out for Rangers.

Without top scorer Alfredo Morelos through injury, Giovanni Van Bronckhorst’s men struggled to break Celtic down and will need to cope better in the Colombian’s absence when they face Braga in the Europa League quarter-finals in midweek.

“When there are two teams fighting for the championship and when you lose against your direct opponent for the race you make it more difficult,“ said Van Bronckhorst on his side’s title challenge.

“It’s not over but this result makes it more difficult for us.”

Joe Hart was forced into only one serious save when he got down low to his left to parry Fashion Sakala’s effort.

And the best save of the match came at the other end late on when Allan McGregor produced a miraculous stop to prevent substitute Liel Abada making it 3-1. – AFP