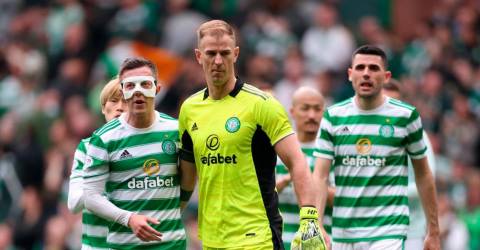 GLASGOW: Celtic remain six points clear at the top of the Scottish Premiership despite being pegged back by Rangers in a 1-1 draw between the Glasgow giants on Sunday.

Victory would have virtually guaranteed Celtic the title and they went in front when Jota prodded in after 21 minutes.

Fashion Sakala levelled midway through the second-half and the Zambian should have given Rangers life in the title race when he hit the post four minutes from time.

The success or failure of Rangers’ season is now likely to hang on overturning a 1-0 deficit in the second leg of their Europa League semi-final against RB Leipzig on Thursday.

Giovanni Van Bronckhorst did not leave much in reserve looking ahead to Leipzig as Rangers aimed to apply some pressure to Celtic heading into the final three games of the season.

However, only a collapse will now deny the Hoops a 10th league title in 11 years with just one more win almost certain to be enough thanks to their much superior goal difference.

Celtic started slowly but went ahead thanks to their only shot on target of the afternoon when Daizen Maeda flashed the ball across the Rangers box and Jota was sharpest to react to fire in the 13th goal of his loan spell from Benfica.

Maeda twice should have double the home side’s lead either side of half-time.

Firstly, the Japanese international failed to connect with a header at the back post from point blank range before firing over with just Allan McGregor to beat early in the second-half.

But Rangers showed no signs of tiredness from their European exertions as they finished the game by far the stronger.

Sakala caught Joe Hart out at his near post from Ryan Kent’s pass 23 minutes from time to get the Scottish champions back in the game.

If Hart was at fault for the equaliser, he made amends with a brilliant save low to his right to deny Scott Arfield the winner in a frantic final 10 minutes.

Sakala then had a glorious chance to make himself a hero as he was played clean through, but delayed before taking on the shot allowing Cameron Carter-Vickers to narrow the angle before hitting Hart’s near post.-AFP