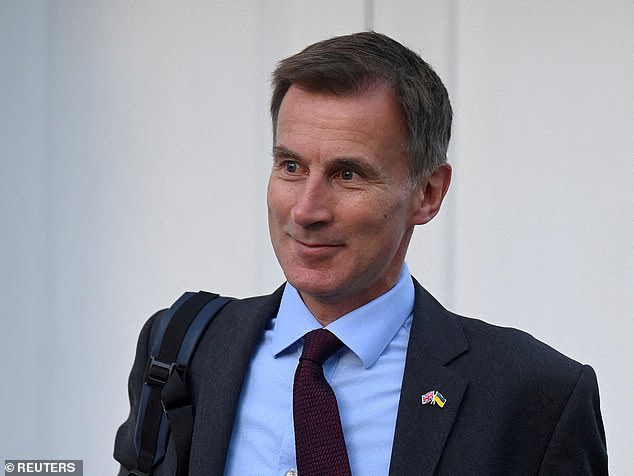 Chancellor Jeremy Hunt is set to clobber the country’s top earners by cutting 45p tax threshold, with the top rate now set to kick in at £125,000

By Glen Owen and Francesca Washtell For The Mail On Sunday

Chancellor Jeremy Hunt has abandoned plans to reinstate Labour’s 50p top tax rate – but will still hammer higher earners in Thursday’s Budget by reducing the income level at which the 45p rate kicks in from £150,000 to £125,000.

It will be part of a raft of tax-raising measures to fill an estimated £50 billion black hole in public finances.

Chancellor Jeremy Hunt is on the hunt for tax as the 45p tax rate set to kick in from earners making £125,000

They will include hiking the windfall tax on oil and gas giants from 25 to 35 per cent, cutting the tax-free allowance for share dividends and dropping the requirement for councils to hold a referendum on tax increases above 2.99 per cent.

Cutting the threshold for the top rate of tax, and freezing income tax thresholds for two more years until 2027/28, will raise billions of extra pounds while technically sticking to the Tories’ 2019 manifesto pledge not to increase income tax, national insurance or VAT.

Moving the 45p rate to incomes of £125,000 and above will raise just £1.3 billion a year but will allow Premier Rishi Sunak to ‘detoxify’ the Government in the wake of Liz Truss’s disastrous attempt to cut the top rate to 40p – one of the measures in Kwasi Kwarteng’s mini-Budget which spooked the markets and handed political ammunition to Labour.

But many Tory MPs fear that Mr Sunak is ‘over-correcting’ and jeopardising the Conservatives’ reputation as a low-tax party. 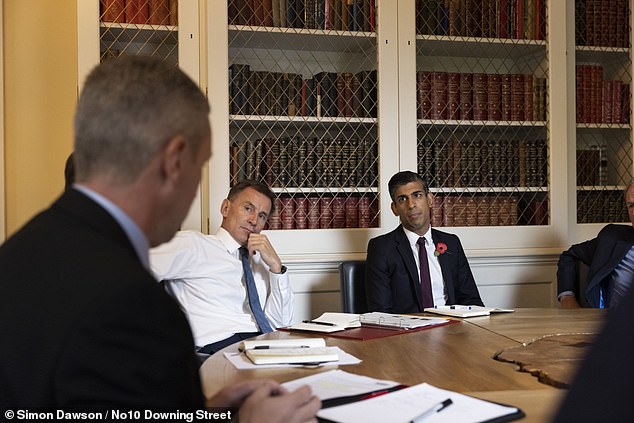 Mr Sunak and Mr Hunt met on Friday to finalise plans for the Budget, which comes after the Office for National Statistics said the UK economy shrank by 0.2 per cent in the third quarter of 2022.

Their stealth taxes will add up to £68 billion, according to think-tank the Centre for Economic and Business Research. Extending the freeze on income tax bands for an extra two years will net £52.5 billion by 2028.

It means three million more low-paid and middle-income earners will be dragged into higher tax brackets as their wages increase – because pay is rising faster due to double-digit inflation.

Earlier this year, when he was Chancellor, Mr Sunak froze the amount at which people begin paying tax at £12,570 and pegged the threshold for the 40 per cent higher rate at £50,271, where they will now remain until 2026.

Economists regard the measure as largely symbolic, as top earners find ways to avoid it or move abroad.

Raising windfall taxes to 35 per cent and extending them to 2028 is expected to raise £45 billion over the next five years.

Mr Hunt is also expected to outline up to £35 billion spending cuts.

Ahead of a G20 meeting of world leaders in Indonesia on Tuesday, Mr Sunak said the most powerful economies had to band together to address the global economic turmoil.

He said: ‘Putin’s war has caused devastation around the world, destroying lives and plunging the international economy into turmoil.

‘This G20 summit will not be business as usual. We will call out Putin’s regime and lay bare its utter contempt for the kind of international co-operation and respect for sovereignty that forums like the G20 represent.’