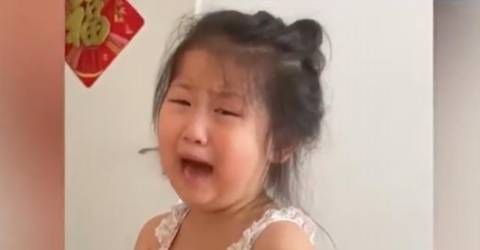 AS much as we love our parents, it sometimes causes us to cringe when we are compared to them. Whether it is their characteristics or physical attributes, some of us at times would rather not emulate them. Take this six-year-old girl for instance.

Hailing from China, this little girl cried when she was told that she looks like her father. According to the online clip, the Suqian native did not find a choice comment from her mother’s friend flattering.

“There were friends at my house and they said that she looked like her father,” the mother said. “She was not happy and started crying, quipping that she doesn’t want to look like her father.”

The girl reasoned that since her mother gave birth to her, she should have looked like her mother instead. As to why she dislikes it, she claimed she feels she would not look attractive if she emulated her father’s appearance.

Having said that, the girl does not personally dislike her father. In fact, she shares a close bond with him.

“He spends more time with her,” the mother noted in the video while claiming that her husband would surely be hurt after hearing the comment.

So, what do you think? Do you think she was out of line or simply just honest? Watch the hilarious video here!