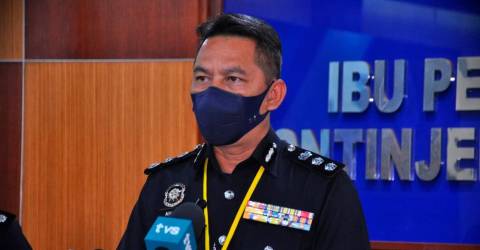 KUALA LUMPUR: A 42-year-old Chinese national who sought to purchase large quantities of palm oil lost almost RM600,000 when he ended up dealing with a scammer here.

He said days later, the foreigner made a downpayment on two occasions amounting to about RM600,000 to a company bank account given by the crook.

Mohd Mahidisham said the scammer promised to deliver the palm oil which he claimed will be shipped from Indonesia to China within two or three weeks.

The palm oil was never delivered and the victim who realised he had been cheated lodged a police report on last Friday.

In a separate case, a 67-year-old housewife lodged a police report on Wednesday after she lost RM1 million to phone scammers two weeks ago.

Mohd Mahidisham said on Jan 15, the woman had received a call from a man who claimed to be a a Telekom Malaysia staff and was told that “her personal particulars were used to register telephone lines” and that “there were outstanding payments owned to the phone company”.

He said the caller then transferred the call to another person who claimed to be the police.

Mohd Mahidisham said the victim was told that her “name was listed as being involved with narcotic crimes and moneylaundering”.

Mohd Mahidisham said the “police officer” advised the woman to move her funds to several bank accounts provided by him to enable an “investigation” to be conducted.

He said the woman did as ordered by the scammer and moved RM1 million of her savings to seven bank accounts.

She later realised she had been fleeced after the “police officer” was no longer reachable.

In another unrelated case, Mohd Mahidisham said a 41-year-old housewife lost about RM34,000 after responding to an online digital currency investment scam she had come across in a social media website last month.

He said the woman was drawn to the offer after being told that she could receive returns of more than four times her investment.

Mohd Mahidisham said the woman deposited the cash into two bank accounts the scammers gave her.

About two weeks later, on checking a so-called account of the “investment” and e-wallet provided by the scammers, she found her investment had grown to more than RM147,000.

However, Mohd Mahidisham said the woman was unable to withdraw the cash and was asked to pay a sum of almost RM30,000 as a fee if she intended to do so.

He said the woman sensed she had been cheated and made a police report on Wednesday.