His head rests face-down on the desk of his wood-panelled office, his phone, papers, diary and filing tray pushed away; his wife sprawls in a plush armchair; spread-eagled on a leather sofa is his smartly dressed daughter.

At first glance, they could simply be dozing off after a heavy lunch of sauerkraut, schnitzel and schnapps.

The truth is altogether grimmer.

Suicide pact: Nazi Dr Kurt Lisso lies dead with his wife and daughter in April 1945. All three figures are dead by their own hands

For all three figures in this photograph are dead. By their own hands.

They crunched on cyanide capsules that day in April 1945 and killed themselves rather than be taken alive by U.S. forces surrounding the city of Leipzig, where he, Dr Kurt Lisso, a fervent Nazi, was deputy mayor. His left elbow rests on his treasured party membership card, a last act of fealty.

Renowned war photographer Margaret Bourke-White came across this macabre tableau when she arrived at the town hall with the victorious Americans.

In the next office, she found the bodies of the mayor, his wife and daughter, scattered in a similar lifelike circle.

Bourke-White’s sombre photograph is a rarity because few pictures survive of what is only now being revealed as a huge, but hidden, phenomenon in Germany at the end of World War II — mass suicide. 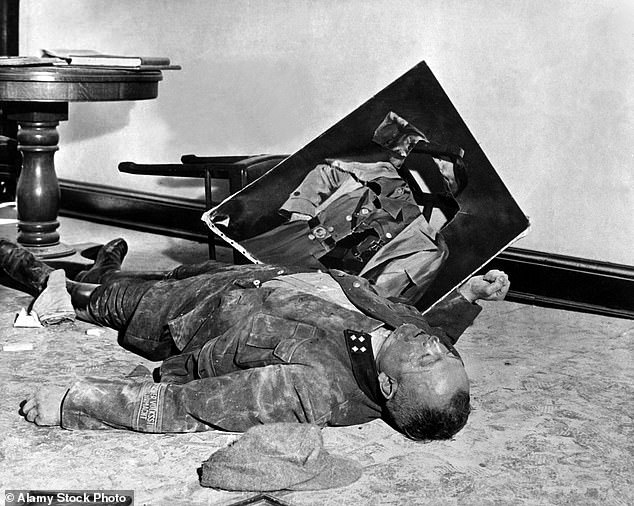 The end: A German general lies beside a torn picture of Hitler after killing himself in Leipzig in 1945 because he couldn’t face the U.S. army occupation

Amid the chaos, the numbers who took their own lives rather than face up to the reality of defeat largely went unnoticed. In the post-war period, as Germany was rebuilt, the nation chose not to remember.

The truth is emerging thanks to research and analysis by TV documentary maker and historian Florian Huber in a best-selling book published in Germany three years ago and now out in an English translation.

The tragedies it describes give us fresh, if gruesome, insights into the sheer madness that swept Germany in the dozen years of Adolf Hitler’s tyranny.

This, it should be said, is no story for the faint-hearted.

Its title alone, Promise Me You’ll Shoot Yourself, sends shivers down the spine — this being the final instruction one 21-year-old girl received from her ageing father as he put on his uniform and went out to help defend the besieged capital from the Russians in the last throes of the battle for Berlin.

‘It’s over, my child,’ he told her as he pressed his pistol into her hand and advised her to put the barrel in her mouth. Then he hugged and kissed her before he left, never to be seen again.

In the event, she chose to disobey him, but all over the Third Reich as it headed to defeat and humiliation, tens of thousands — the exact numbers are unknown — chose this way out.

Many of them did so out of naked fear. As the tanks of Stalin’s unstoppable Red Army advanced from the east, Nazi propaganda spread terror stories of Bolshevik ‘mongol hordes’, raping, torturing, pillaging, seeking revenge.

This was intended to ensure the nation fought to the bitter end, but it unwittingly encouraged those in the immediate firing line, women in particular, to seek safety from even greater harm in Selbstmord — suicide.

When first contact with the Red Army showed those fears were not in the slightest bit exaggerated, with random slaughter and rape of young and old alike almost routine, even more decided to take control of their own fate and kill themselves.

Take, for example, Demmin, a small town of 15,000 inhabitants in north-eastern Germany. It was largely untouched by the war — no bombing, no fighting — until the spring of 1945 when a wave of refugees, their meagre possessions piled on carts, came though, heralding the tide of those fleeing the brutal Soviet soldiers.

Anticipating what they would do, 27-year-old Lothar Buchner hanged not only himself, but assisted his wife, her sister, her mother and grandmother, and then his three-year-old son to do the same — a whole family wiped out.

It became the pattern as fear spread like a plague. Over just five days, at least 600 and possibly as many as 1,000 people from all walks of life chose to die in Demmin rather than risk the wrath of the Russians.

Bodies hung from beams in houses and oak trees in the wood. Others chose poison (prussic acid was popular), a razor blade slashed across the wrist, or drowning. Mothers donned rucksacks filled with stones, tied their children’s hands to them and ducked down into the canal and river that flowed through the town, never to resurface alive.

Corpses that washed up on the banks of the waterways were laid out in rows.

Disturbing numbers of the dead — perhaps as many as a third — were children.

Too young to do the deed themselves, they must have been dispatched by a frantic parent, desperate to spare them greater misery. Throughout Germany, people talked openly about putting an end to it all. Conversations about the relative merits of different poisons, and particularly what dosage would do the trick, were commonplace.

At the last performance of the Philharmonic in Berlin, as the strains of Wagner’s Gotterdammerung (Twilight Of The Gods) died away and the audience shuffled out, uniformed Hitler Youth boys were rumoured to be handing out cyanide capsules from baskets to anyone who wanted them.

There was no holding back, especially after Hitler himself led the way. As the Russians closed in, he shot himself in the study of his last-ditch bunker in Berlin, taking Eva Braun, whom he had just married, with him.

‘I choose to die,’ he declared, ‘rather than face the ignominy of deposition or capitulation.’

His self-inflicted death meant he also avoided retribution for all the appalling atrocities he had inflicted on the world — as did others in the Nazi hierarchy guilty of some of its terrible crimes. His closest lieutenant, Joseph Goebbels, followed suit. Himmler and Goering would in time go the same way,

So, too, would others farther down the chain of command who played a part in genocide — SS generals, concentration camp doctors, clerks in the Reich Security Headquarters, the head of the Reich Genealogy Office, the head of the Gestapo in Dresden, the Special Commissar for the Deployment of Foreign Labour.

Most of Germany’s military commanders were accessories, too, and 53 out of 554 army generals, 14 out of 98 Luftwaffe generals, and 11 out of 53 admirals committed suicide.

It is not hard to see the motivation to end it all for those under direct threat, whether from the condemnation of their captors or the barbarism of the Russians. Or from shame. As Berlin fell, it is estimated that 10,000 women committed suicide after being raped.

One teacher instructed her class of impressionable girls: ‘If you are dishonoured, you have no choice but to die.’ But what is bewildering is the high number of suicides of ordinary Germans who came to the morbid conclusion they could not live without the Nazi party and Hitler.

In Berlin, there were 100 suicides in one suburb alone on the first day of Soviet occupation. In the following weeks, stories persisted of married couples shooting themselves amid the rubble, of women jumping out of windows, poison victims lying at the side of the road, families hanging from window crossbars.

Suicides cut across all professions and classes, affecting both sexes and all age groups. A person’s closeness to or distance from the Nazi regime made no difference. In the town of Demmin, blue and white-collar workers took this drastic final step. The dead included a master butcher, a carpenter, a cartwright, a cleaning woman, a chief tax clerk, a mechanic, a chef, a chemist, a postal worker, a well digger, a dentist, a barber and a midwife.

The feeling that life post-Hitler had lost all meaning was encapsulated by Magda, Goebbels’s wife, who joined her husband in death in the ruins of Berlin. But not before — out of demented maternal love and horribly twisted loyalty — she had snuffed out the lives of their six little children with cyanide, a horror that seems needlessly cruel and inexplicable.

It is a chilling and tragic farewell message, and a bewildering one. Huber asks: ‘What can the inner world of these Germans have looked like for them to see death as the only way out?’

He finds his answer by acknowledging Hitler’s success in transforming not only Germany’s fortunes, but its self-image.

In the Twenties, this was a proud nation humbled after defeat in World War I, economically bust, with unemployment out of control, beggars and wounded ex-soldiers everywhere, politicians floundering. The nation was on its knees, paralysed by resentment.

Then along came Hitler in the Thirties with his heady and hypnotic ideas of making the Fatherland great again. His rhetoric was thrilling and mesmeric as he whipped German society out of its torpor and into a state of sustained frenzy and excitement.

After he took power, bleakness of outlook gave way to a sense of relief, leaving people optimistic and exuberant.

The Nazis initiated social reform projects that had once seemed impossible — workers’ holidays, days off, family allowance, tenants’ rights protection, mass tourism, motorways, a national holiday in every month of the year to celebrate one thing or another.

Owning a house was no longer a utopian dream, travelling no longer a privilege — as long as they shut their eyes to the increasing repression, the Jewish pogroms and the lack of intellectual freedom.

But then Hitler’s new Germany began to fall apart.

The row-back began with the failure at Stalingrad on the Eastern Front, where Germany’s blitzkrieg expansion ground to an ignominious halt against the dogged Red Army. Newspapers at home were suddenly filled with death notices of men killed in action — 2,000 every day.

The tide turned not just militarily, but emotionally.

The love affair — the so-called Fuhrer liebe — between the nation and its leader began to sour. With the D-Day landings in 1944 and the opening of the second front, adoration turned to apprehension.

As it dawned on people that failure and defeat were an increasing possibility, the bubble burst and the psychological shock wave was immense. ‘The emptiness was palpable,’ writes Huber. ‘They felt a collective loss of meaning. Any thought of what might come afterwards was terrifying. After Hitler there could be nothing. No Reich, no political movement, no national community.’

As he headed towards his own destruction, Hitler took his devastated people with him. When he took a pistol to his head and pulled the trigger in the last days of the Reich, the only course that made sense for far too many of them was to do the same.

Their desperate plight was summed up by the once loyal Nazi worker who, as the war came to an end and the regime collapsed, declared: ‘Everything I believed is turning out to be madness and a crime. I can’t carry on.’

It could be the epitaph for his entire generation.