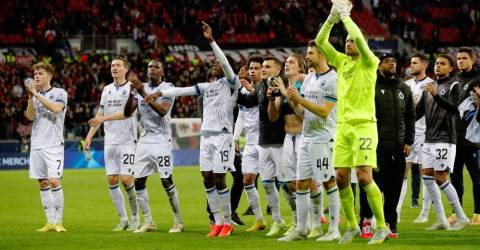 LEVERKUSEN, Germany: Champions League surprise package Club Brugge are confident they can continue to be a thorn in the sides of more fancied teams in the competition after reaching the knockout phase.

Coach Carl Hoefkens, in his first season in charge, said he was disappointed after FC Porto pipped them to first place in Group B on Tuesday but overall he was “incredibly satisfied” with what they had achieved.

The Belgians secured their place in the last 16 after four group games, including a 4-0 win at Porto and home wins over Bayer Leverkusen and Atletico Madrid.

They lost 4-0 at home to Porto last week – the only goals they conceded in the group – before Tuesday’s 0-0 draw at Leverkusen saw them finish a point behind the Portuguese.

“I told my players that I felt slight disappointment, which says a lot about the confidence I have in this group,“ Hoefkens told reporters.

“But that quickly gave way to the realisation that we have achieved something very special.

“Whoever would have predicted this in advance, would have been put it in the madhouse,“ he quipped.

Brugge will be in the pot of runners-up in Monday’s draw and can expect a more difficult draw than had they ended as group winners.

Hoefkens said there was little to choose between the teams at this stage and that some top sides had also finished second in their groups.

“We’ll see what comes out of the draw but with those five clean sheets, we have proven that we are stable,“ he added. “So, believe in your own quality. We can make it difficult for any team.” – Reuters