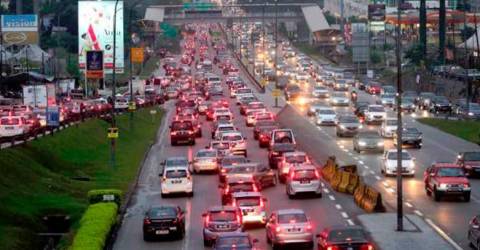 PETALING JAYA: Traffic in the Klang Valley has evidently become worse in the past few weeks, with congestion occurring across the city for most of the day and not just during peak hours.

Marketing manager Theresa James said the thought of having to face such traffic conditions stresses her out daily.

“I used to start my day an hour before arriving at work because before the pandemic, traffic was not this bad. Now, I have to be up at the crack of dawn just so I can make it on time to my morning meetings at the office.

“Every morning feels like a mad rush and every evening seems never-ending. If you are 15 minutes later than usual clocking out, you end up getting caught in heavy traffic that can last up to two hours,” she lamented.

Theresa, who is also a single mother to a three-year-old, said the situation not only affects her schedule but also her son’s.

“I feel extremely bad for my son at times because unlike most of his friends, he has to be up earlier just so I can send him to his playschool before rushing to work.

“It has affected his sleep schedule and his teacher has complained that he is not as energetic as he used to be.”

Theresa urged the government to address the issue that is affecting working Malaysians on a daily basis.

“Employers want us back in the office and most places have yet to accept a hybrid work system. Some have advised me to consider public transport which, if it arrives on time, would be a great alternative.

“However, we are unfortunate to have to deal with public transport that lacks accessibility, promptness and regularity,” she said.

Freelance writer Lim Yi Ling feels there are just too many cars on the road.

“I own a car and while I would love to use it when I am down in Kuala Lumpur visiting my family, the traffic makes me think twice.”

On whether she thought Kuala Lumpur was a livable city, she said: “With the current traffic conditions, I believe people end up wasting precious time stuck on the road. Unfortunately, while one would believe that using public transport would help with this issue, the time spent waiting for the public transport itself takes too much time.

“Our public transport is good but I believe it can be better. We should increase the frequency and make sure that any new projects are more accessible to people who live farther away from the city. It should be accessible within walking distance without the need to take a taxi.”

Another commuter, who wanted to be known only as Ash, said as a frequent user of public transport, she would rate our service a four out of 10.

“I do not own a car so I rely on public transport. It is sad to see that we do not give importance to punctuality and regularity in this sector. Most of the time, the train doesn’t come on time, causing a crowd.

“It becomes an issue to plan an outing or make our way to work due to this uncertainty. I have to take the KTM train way earlier because I’m scared that I might miss the bus at KL Sentral,” she said.