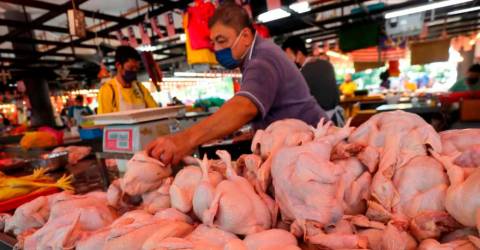 PUTRAJAYA: The government has allowed companies to import frozen whole chicken from this month until February next year, said the Ministry of Agriculture and Food Industries (Mafi) today.

Mafi in a statement said it was to cover shortages in chicken supply involving import consideration of up to 10,000 metric tonnes or 5.5 million chickens per month.

Companies wishing to import frozen chickens must be registered with the Companies Commission of Malaysia (SSM) and have cold storage facilities, said the ministry.

“The import permission will only be allowed from countries and slaughterhouses that have been approved by the government,” Mafi said.

On Dec 1, Prime Minister Datuk Seri Ismail Sabri Yaakob announced that the government would import frozen chicken to enable the people to obtain chicken at a lower price.

Mafi said the permission was a temporary measure until supplies could be stabilised by the local chicken industry.

The ministry said, based on observations by the Department of Veterinary Services Malaysia (DVS), the country is facing an average of 18 per cent shortage in October and November, adding that it was expected to continue to this month.

“This could be attributed to the sudden increase in demand following the reopening of economic sectors especially hotels, restaurants and catering services from October,” it said, adding that it has led to rising prices of up to RM10 per kilogramme of chicken in wet markets and supermarkets.

“This intervention measure took into account all aspects to ensure that supplies of chicken in the market are sufficient and at reasonable prices while making sure the welfare of local chicken breeders continues to be safeguarded,” it added.