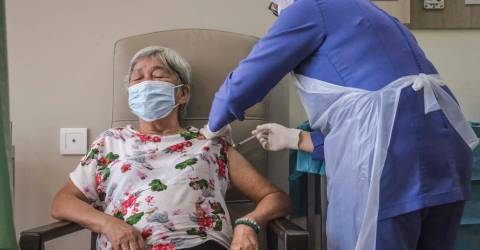 IT is time the government considered a social pension scheme of at least RM100 to RM200 monthly for senior citizens in Budget 2023, that will be presented on Oct 7.

Currently, only government civil servants get a pension.

Suffice to say, senior citizens are now at the receiving end due to inflation and the rising cost of living.

Many face difficulties in making ends meet and a large number from the M40 and B40 group are unable to rely on their savings or their children for their expenses.

Their working children don’t have much to spare as they have their own families and various needs to shoulder and the present post-pandemic situation has made it tougher.

As such the government needs to seriously consider giving senior citizens, who have a small income based on their LHDN, BR1M or BSH records, at least RM100 to RM200 per month to help support their livelihood.

This is not a big amount considering the nation’s status as a middle-income country.

Malaysia does not do much for its senior citizens other than some token gestures and this is painful considering the private sector workers’ contribution to the progress of the country since independence.

Here in parliament, there is hardly a whimper by MPs about the plight of senior citizens who, despite their weakness and frailty, continue to carry out their democratic duty by making sure they vote in every election.

Senior citizens attach more value to the right to vote than young voters.

One can observe this in any queues at a voting station and note that senior citizens always form a sizeable number.

Yet, hardly any politician, MP or minister can be heard lobbying for more aid from the government for this vulnerable group.

Young MPs need to know that with the swift passage of time they too will be senior citizens.

The money given out to senior citizens under the BSH scheme is simply not enough and is a mere token.

Senior citizens need to be given at least RM100 to RM200 monthly for a start and when the nation progresses to become a higher-income country the amount can be increased.

Many senior citizens, some in their late 70s, can be seen working as security guards and in other sectors because they lack any savings, or pension, and have to work for their daily needs.

This is a pitiable situation and the government needs to do more for them to ensure that they lead a satisfactory life in their twilight years after having done much for the development and progress of the country.

The government should not only focus its attention on civil service pensioners but also consider the hardship of private sector retirees.

The so-called savings in the EPF do not matter much for the low-salaried B40 group as it is spent within a few years after retirement.

After retirement Socso is worthless for senior citizens as they will have to pay for their medical expenses or treatment for any disability.

One of the main concerns for senior citizens is their need for medical attention due to old age.

Those opting for government hospitals have an endless wait even though Malaysia is now reputed to have a surplus of doctors.

One has to wait for hours even for simple treatment or expect delayed appointments to seek the services of a medical specialist.

The government should show more concern for its senior citizens by allocating a dedicated separate wing in every public hospital for senior citizens. Through this process, they can get medical attention faster and also specialist care.

The government needs to set up a committee to look into ways senior citizens’ needs and concerns can be addressed more holistically.

Simply giving senior citizens a somewhat glamorous title such as warga mas is simply not enough.