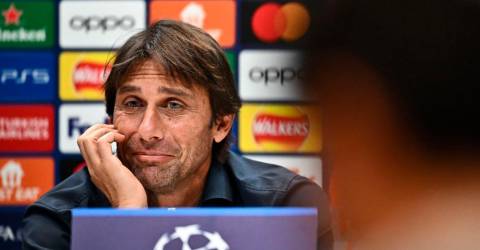 LONDON: Antonio Conte has insisted Tottenham Hotspur are well aware of the need to bring in new players during the January transfer window if the club are to remain competitive in the Premier League.

Spurs are at home to Portuguese side Sporting Lisbon in the Champions League on Wednesday, a match where a victory for the London team will send them into the last 16 of Europe’s elite club football tournament.

But they go into the game following successive defeats by Manchester United and Newcastle that have left the club third in the Premier League table, five points adrift of leaders and arch-rivals Arsenal.

Tottenham also face a growing injury list that has placed a question mark over their ability to sustain a bid for a top-four finish without fresh reinforcements during the next transfer window.

“I think the club understand very well the importance of bringing in important players, good players, in January,“ Spurs manager Conte told a pre-match press conference on Tuesday. “I’m not the person who has to explain this to my club.”

The Italian added: “I repeat we have to take this big achievement of going to the next round tomorrow and take this opportunity to do it.

Conte, 53, has spoken in recent weeks about the path Tottenham are on to becoming a genuine contender for the Premier League title — Spurs were last crowned champions of England back in 1961 — and a force in Europe as well.

But he was coy when it was suggested to him that this season could be a breakthrough campaign for Tottenham given both Chelsea and Manchester United are under new managers in Graham Potter and Erik ten Hag.

“We have to focus on the present and try to do our best,“ he said. “This season will be more difficult than last season because after the transfer market you have seen many, many teams have spent a lot.

“This is not the right moment to answer. Since November now and after one year I understood a lot of things. The first moment for me was really difficult to understand.

“Now I am going into the Tottenham world. I understand very well what our situation is, what is our position, what is our starting point, how long is our path to be competitive and to fight for something important. Now for sure my knowledge about Tottenham is more complete.”

Cristian Romero (calf) and Pierre-Emile Hojbjerg (thigh) missed training on Tuesday after also being sidelined for the Newcastle defeat.

But unlike Dejan Kulusevski (hamstring) and Richarlison (calf) they could still feature against Sporting.

“Richarlison and Kulusevski are out, recovering but still not available,“ Conte said.

“Romero and Hojbjerg tomorrow (Wednesday) morning we will see. If there is a possibility for them to recover we will try everything because it’s an important game for us.” – AFP