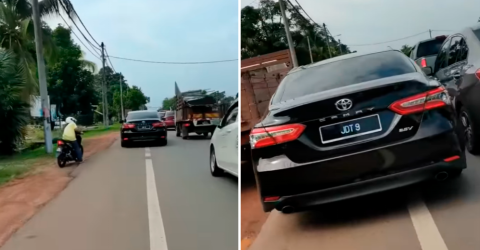 BATU PAHAT: The driver of a vehicle reserved for the use of the State Health and Unity Committee chairman Ling Tian Soon was yesterday issued a ticket for using the emergency lane to avoid traffic congestion.

Batu Pahat district police chief ACP Ismail Dollah said the driver of the black Toyota Camry was called to the district Traffic Investigation and Enforcement Division to record his statement at 3.30 pm for the offence.

He added that the police obtained a video of the incident, which occurred at 11 pm last Wednesday (Sept 14), and went viral on social media.

“Investigations revealed that the offence took place at Jalan Tongkang Pechah here at 9.45 pm on Monday (Sept 12). Further checks revealed that the vehicle belonging to the Johor State Secretary’s Office was reserved for Yong Peng state assemblyman Ling Tian Soon,” he said in a statement today.

The case is being investigated under Rule 6 (1) Road Traffic Rules 1959.