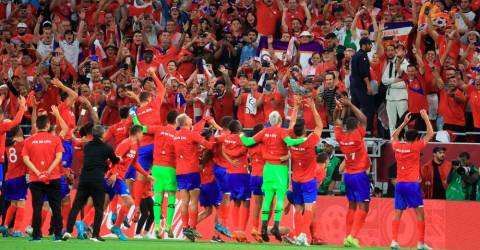 DOHA: Costa Rica coach Luis Fernando Suarez said he felt a sense of vindication for persuading veteran players like Keylor Navas and Bryan Ruiz to stay on with the national team after they helped secure World Cup qualification on Tuesday.

The Central Americans edged New Zealand 1-0 in their intercontinental playoff in Doha to claim the last available berth at the World Cup finals in Qatar later this year.

In goal for Costa Rica was 35-year-old Navas, who has won more than 100 caps, while 36-year-old forward Ruiz also featured.

“I had to persuade them to stay on and play another World Cup and I’m glad I did,“ said Fernando Suarez after the one-off tie at the Ahmad bin Ali Stadium.

“There were many who criticised that but they were an important part of the success of this squad.

“This group is spectacular, I can’t describe it. It is a spectacular human group. With these players it is much easier to do things.”

The prize for beating New Zealand was a place in Group E alongside Spain, Germany and Japan at the finals, which start on Nov. 21.

“Ah, yes I forgot about that,“ said the coach when asked about his team’s prospects in a tough group. “Tomorrow I’ll have to start thinking about everything. But we’ll have to improve and I hope in the next few months we can do that.

“We want to be competitive against these countries, I think that is important.”

Costa Rica had failed to grab an automatic qualifying berth in the CONCACAF preliminaries but Paris St Germain goalkeeper Navas, who will be heading to his third successive World Cup, said he never lost hope.

“We never stopped believing despite the fact that we played many finals, many games with water up to our necks, that we had to win,“ he added.

“We were under a lot of pressure.” – Reuters