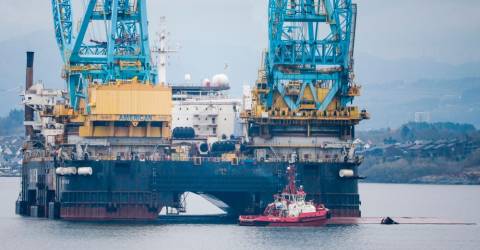 OSLO: A huge crane ship was left listing outside the harbour of Stavanger in southwestern Norway on Thursday after a steel wire snapped during a loading operation, police said.

The Saipem 7000, operated by Italian oil services company Saipem, ended up tilting sharply, according to witness photos released by the Norwegian media, but no injuries were reported among the 275-strong crew.

The accident occurred during a lift at around 10 am (0800 GMT) in a fjord adjacent to Stavanger, a hub of Norway’s offshore oil industry, police said.

“Witnesses heard a loud bang, but there was no indication of an explosion,“ she added when asked about initial media reports mentioning an explosion.

“No people were hurt, but there was damage to the ship and there is a barge that tipped over and is floating upside down,“ Randulff said.

Built in Italy in the 1980s, the specialised vessel, one of the largest in the world, can be partially submerged to lay pipelines and lines for the oil industry.-AFP