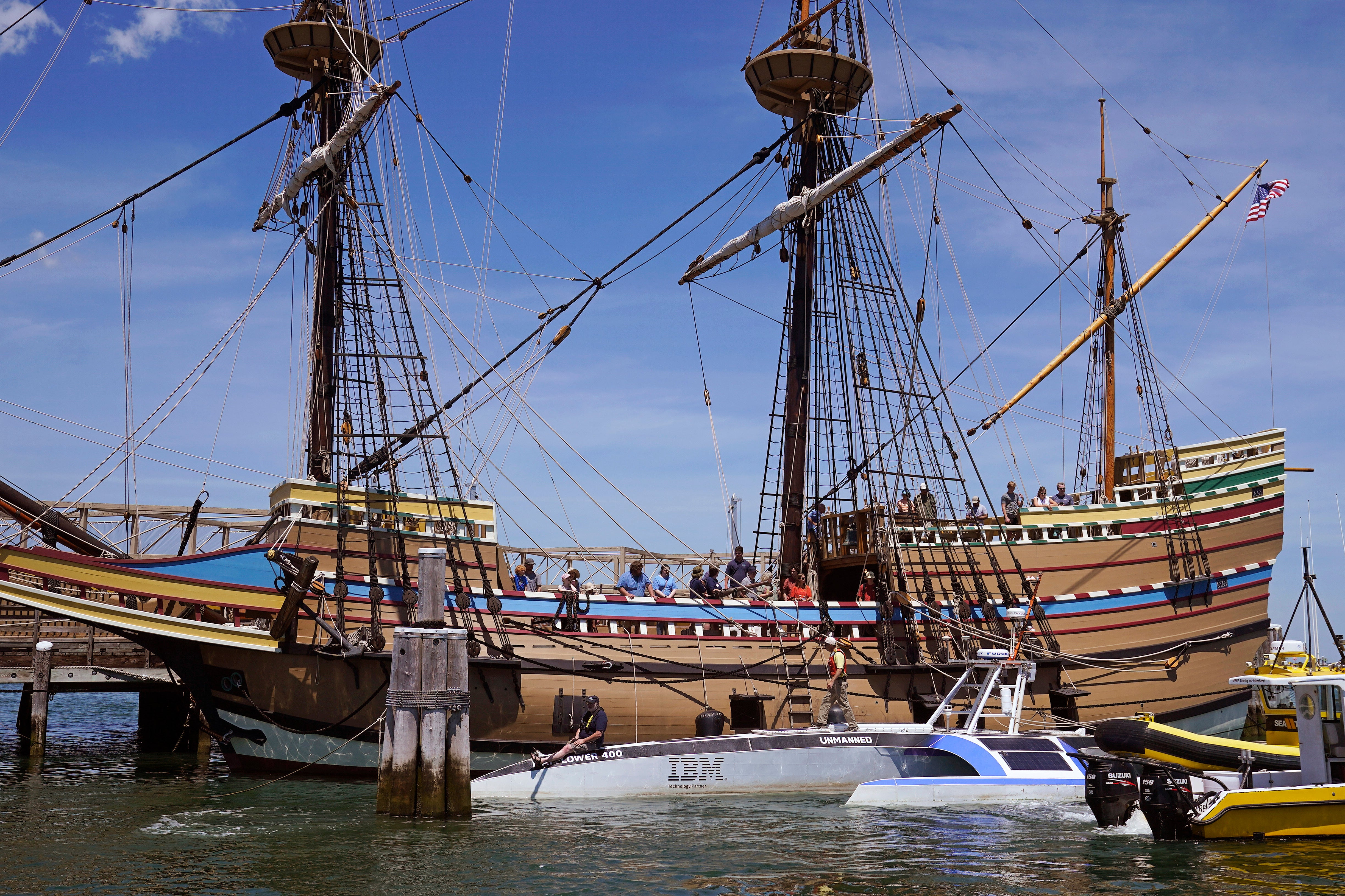 A crewless robotic boat retracing the 1620 sea voyage of the Mayflower has landed near Plymouth Rock.

The sleek Mayflower Autonomous Ship met with an escort boat as it approached the Massachusetts shoreline Thursday, more than 400 years after its namesake’s historic journey from England.

It was towed into Plymouth Harbor — per U.S. Coast Guard rules for crewless vessels — and docked near a replica of the original Mayflower that brought the Pilgrims to America.

Piloted by artificial intelligence technology, the 50-foot trimaran did not have a captain, navigator or any humans on board.

The solar-powered ship’s first attempt to cross the Atlantic in 2021 was beset with technical problems, forcing it back to its home port of Plymouth, England — the same place the Pilgrim settlers sailed from in 1620.

It set off from the southwest English coast again in April, but mechanical difficulties diverted it to Portugal’s Azores islands and then to Canada.

Brett Phaneuf stands on the deck of a tow boat as the Mayflower Autonomous Ship is guided next to the replica of the original Mayflower, on Thursday, June 30, 2022, in Plymouth, Mass.
(AP Photo/Charles Krupa)

“When you don’t have anybody onboard, you obviously can’t do the mechanical, physical fixes that are needed,” said Rob High, a software executive at IBM helping to work on the project. “That’s also part of the learning process.”

On Monday, the ship departed Halifax, Nova Scotia for a successful 4-day journey to Plymouth Harbor.

The Mayflower Autonomous Ship is seen sailing about twenty miles off the coast of Plymouth, Mass., after a crewless journey from Plymouth, England.
(AP Photo/Charles Krupa)

Nonprofit marine research organization ProMare worked with IBM to build the ship and has been using it to collect data about whales, microplastics pollution and for other scientific research. Small autonomous experimental vessels have crossed the Atlantic before, but researchers describe it as the first ship of its size to do so.

The voyage’s completion “means we can start analyzing data from the ship’s journey” and dig into the AI system’s performance, High said.

High added the prospect of such crewless vessels navigating the seas on a continuous basis will make it easier to collect “all the kinds of things that marine scientists care about.”